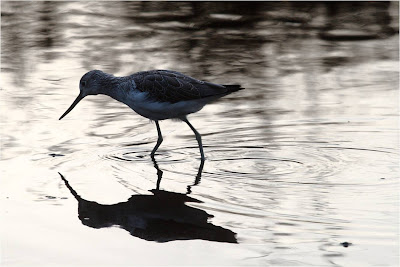 Scilly's got a few tasty birds on it I thought to myself as I stumbled round an un-yielding patch. I could do with some of that. It could be done. It could be arranged.

Getting the time off was the first obstacle.

Job done (with a proviso to give more notice next time). Of course!

Lock yourself out of the flat: done.


No wait a minute, back up. That wasn't meant to happen.

No matter, spent a good hour visi-migging from the roof, while I waited for the locksmith, with the result of : 100 Chaffinch north, Siskin, Redpoll, Fieldfare, Redwing and even 35 Skylark over - better than the patch!

After a sleepless night next to a snuffling and shifting companion, a group of gregarious college lasses, a snoring guy across the aisle, I arrive in Penzance and rush round to the ferry terminal. Booked on, I take my favoured position on the Scillonian just about three weeks since the last time I was on her, hoping against hope that my stomach will behave itself and that I don't embarrass myself too much on the 2 and half hour trip (I once felt rather sick just popping across Pool Harbour to Brownsea). It's the fear of soiling yourself in the most inglorious way that encourages the demons, but with luck and and plenty to see things would be OK.

The fog descended as we left the harbour and my horizon dropped to a few hundred feet.

A couple of Arctics and a couple of brace of dolphin the only entertainment barring the constant dribble of Gannet and the slightly odd sight of a Chaffinch chasing the boat after we passed Lands End. After over-hauling us it decided turn back, so its probably in America now.

We landed on St Mary's, my honour and stomach still in one piece, and I set off to dump some stuff at my lodgings. Only it had closed for the Winter. I wasn't actually surprised.

The staff at the tourist office stepped in and found me a great little gaff, Mary's Hall Hotel, "all-in" it was quids cheaper than the slight seedy place I had booked. Sweet! 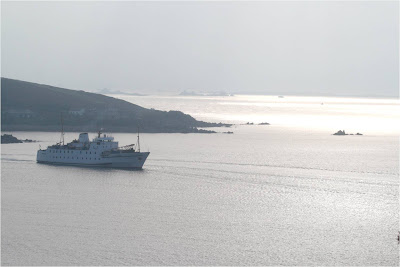 At this point I must point out that when I do the birding thing on my own I tend to go the comfort rather than fiscally prudent direction. So look out for "the best hotel guide what to do birding from" and its accompanying restaurant guide.

And in less than an hour I was out looking for my first bird. Perhaps in hindsight I should have gone for the Rosy Starling, but I went north for the Upland Sandpiper. Rather I went for the sandpiper when I couldn't find a way on to the golf course for the Red-throated Pipit (one of the birds I really wanted to see, you know just in case we get one on the flats!).

Just before the bulb field the upland had been showing from, I met a birder looking the other way. "I think I 've got a Wryneck", he said.

Indeed he had. I confirmed his ID as the bird flew across the field and sat up in a elder just up the hill from us. Sweet, another bird that was on my must see list, and strangely higher on the wish list than the supposed megas!

The bulb field the sandpiper liked to frequent was very empty. Not good. I looked at the empty field for some time, and concluded it was empty. Time was not on my side here, and dipping was not in the schedule. A few other birders turned up and stared at the empty field from a variety of angles. Nothing changed. Apparently the bird had flown of sometime before eastward. Hmm, deja vu (a Solitary Sandpiper reference that will become apparent in the near future, or if you are of an impatient nature: http://wansteadbirder.blogspot.com/2011/09/one-of-my-better-birding-decisions.html).

I tagged along with this group for a bit picking up Yellow-Browed and Fieldfare (the first for the island this autumn), but lost them at the duck pond where our Solitary Sandpiper dreams were so cruelly dashed.

Somehow I ended up on the golf course with two ladies hacking their way towards me, their wayward slices also driving a rather interesting pipit my way too. I gave the green a very wide berth and waited as they started their next hideously over par hole. Somehow the Red-throated Pipit had dodged the flying missiles and popped out between me and tee. Good time to start thinking about getting the camera out.

Opportunity missed I was joined by a small group of birders and we followed the bird back up the fairway as it was chased repeatedly by its mipit cousins. By this time I realised that was as good as it was going to get, so I made my way off the course. By the entrance a probable juv Rosefinch (which I would have illustrated with a pic from Fetlar, but that's on the broken camera) gave a good view until I tried to take a snapshot.

Back up the road to the bulb field. Still empty.

A guy is walking towards me with a smile on his face. The Upland it appears is now in another bulb field further towards Borough farm and showing well. I am now very conscious that I am literally going round in circles. But a hundred metres up the hill, there's a guy on a quad bike (obviously important), just about to zip off. Happily he gets me on to the bird, which has hunkered down in a furrow apparently not moving, something it does rather a lot by all accounts.
And what a strange thing it is, a cross between a bustard and a pigeon to my way of thinking. 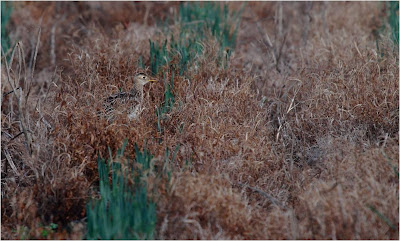 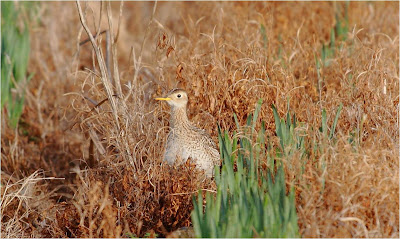 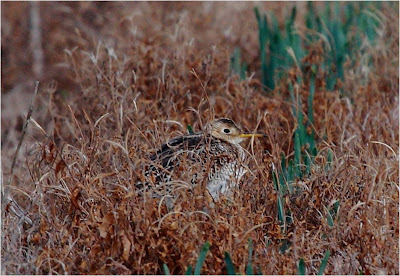 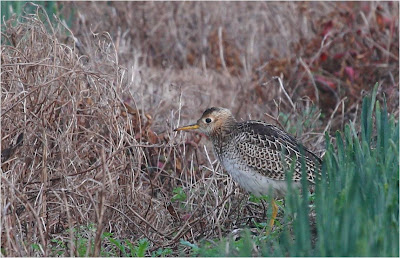 Job done. I courteously help a few other people on the bird and then head off for my rather good supper and well a needed kip. On the way though Lower Moors beckon. Rattle off Wilson's Snipe and Water Thrush and then home I thinks. 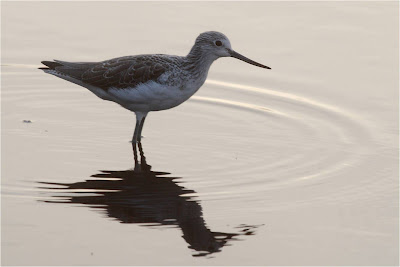 The Snipe a snip. It shone out from the dowdy European birds even as it slept and in the increasing gloom. 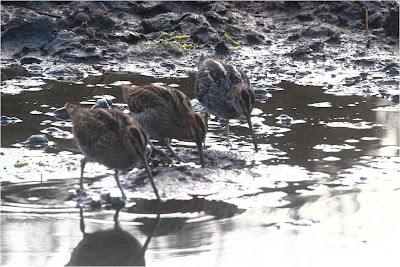 While I waited for it to move a very confiding Lesser Yellow Legs and Greenshank kept me entertained and I was bitten and not for the last time.... 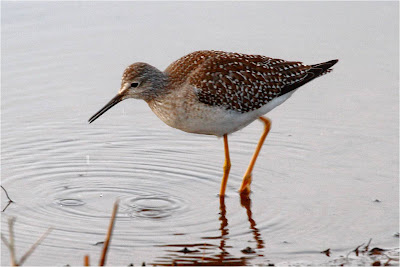 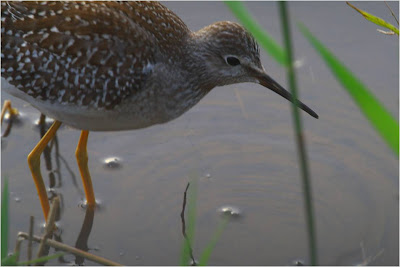 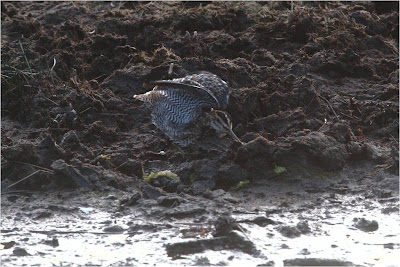 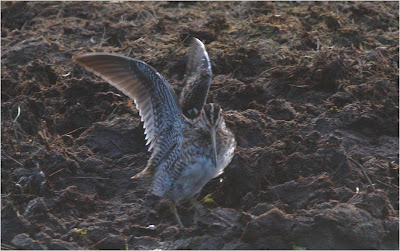