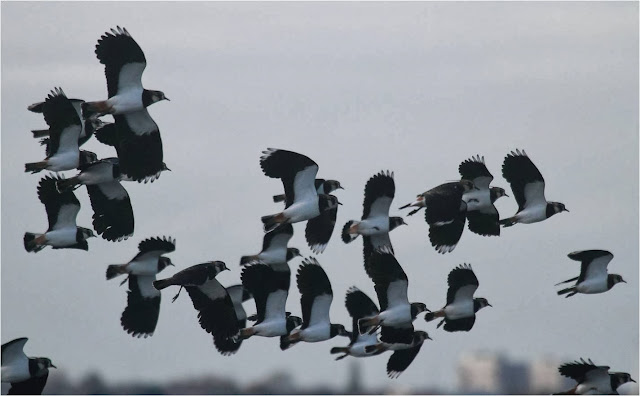 More dippage. Thursday: news of not only Bewick Swans apparently roosting at Rainham, but also Goldeneye and Red-breasted Merganser on the river. They wont be there in the morning.

Just to make sure they weren't there in the morning I was. Early! It was cold, and with the centre not opening till 09:30 it remained cold. Right enough none of the birds were there so I had to make do with a brief glimpse of the Merlin again as it scooted up over the tip, and a couple of Avocets in Aveley Bay. A quick sprint around the reserve fortified by a cup of the strong brew and then work.

Saturday and after a breeze round the patch I resolved to get the Black-throated Diver at the KGV. I phoned Mr Fisher and asked him if he wanted a look-see. He did, so after meeting up with him at Blackhorse Road, we wandered up the Lea Navigation towards Ponders End. Always fun with Mr F and today was no exception. A couple of Kingfisher on the river and a female Goosander flushed from the flood relief channel passed the time quickly. Before we took up the challenge of the gate to the reservoir, we had a pit stop at Maccy D's. Food is always good if you know in your heart your going to meet disappointment in a short while. 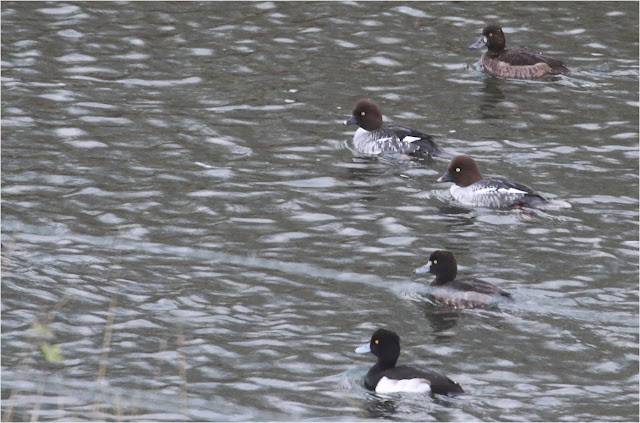 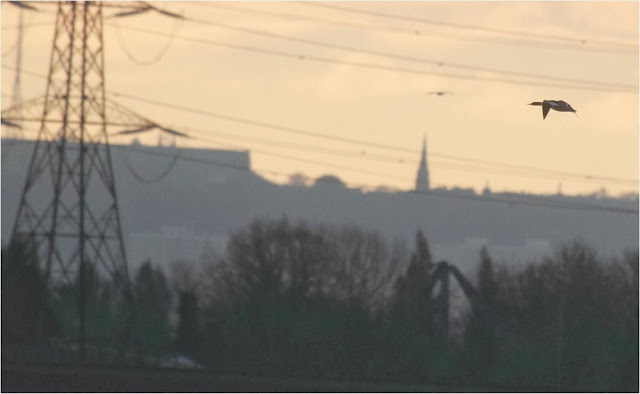 The gate puzzle overcome, disappointment followed. No sign of the diver, however Goosander and a heap of Goldeneye sort of made up for it. We checked the south basin then trod carefully on all available sheep pooh and checked the north basin. Could it have moved on to the Girling to avoid the Saturday sailors? Only one way to find out and as the sun set over Tottenham we managed to climb up Mansfield park on a hiding to nothing. The light wasn't that bad, but all we could see looking distantly at the most restricted reservoir in London, were gulls, thousands of them with more streaming through. Bugger!

Sunday and its 3:00 AM and I am round Jono's house to meet up with Monkey and Mr Howard for a little jaunt down to Pembroke, again! Luckily I fell asleep and woke up near Bristol not only missing the tedium of the motorway, but a good hour an half of country and western music. Probably!

First light sees us drawing up in the makeshift car park, already fairly full, and join the queue for the Orphean Warbler that had taken a liking to someone's back garden and in particular their apple trees, and more precisely their rotting apples. With only 40 or so allowed in the garden at one time it was like getting on a bus. The polite, like yours truly, getting the worst position. Saw the bird, but not enough to get the camera to focus on anything bar the guys head in front. So a "Lesser Whitethroat" with murder in its eyes; in no large part down to its diet of fermenting apples. Anyway while we waited for another view I had a chance to look around. 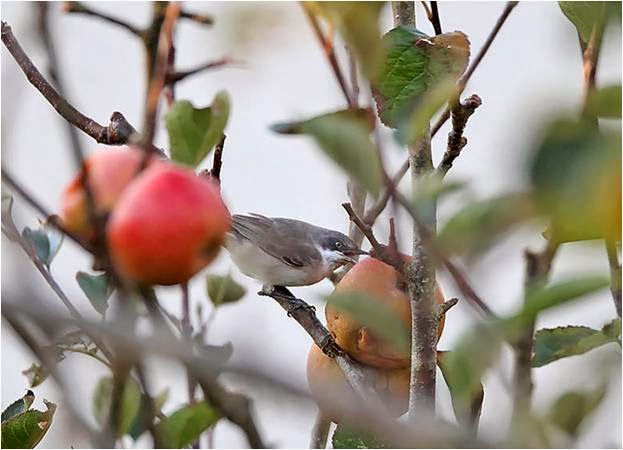 Thanks to Mr Lethbridge for the pic

This really is a beautiful part of the country. Large hedgerows, wooded valleys and copses, a reed bed down to the estuary (heard Cetti's which apparently are new arrivals here as they spread across the country - bar Wanstead). Pembrokeshire is now in the running as a retirement destination. After another viewing we thanked those involved in organising it, left our donation (apparently they have raised over a grand for the Skolkholm Island fund) and left. 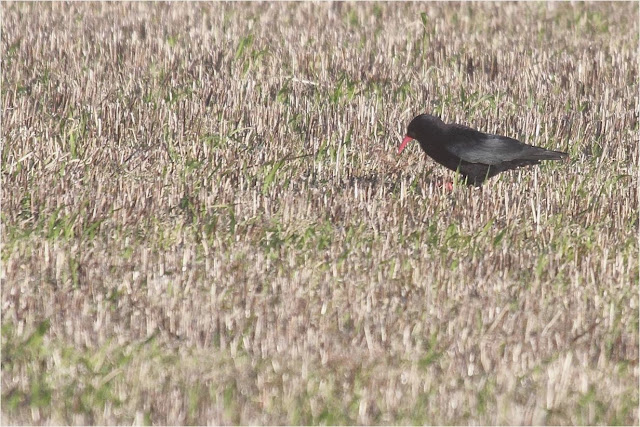 A quick visit to where we had seen the wheatear a few weeks back; Howard wanted to see Chough and we did, and he also found a Dartford Warbler while we were stalking the crows back by the car park. Then on Jono's suggestion we went homeward via the Forest of Dean for the Two-barred Crossbill that had been frequenting the place. I would have advised him against this purely on the certainty of failure as these are my current dipping nemesis.

This part of the journey was an improvisation and while we got to the Forest of Dean easily enough, Monkey's map reading skills couldn't find us the right spot. Never dipped a location before. Oh, I have! many times. A great trip, thanks lads and very fortuitous as the cider soaked warbler staggered off during the night, either that or it's liver succumbed.

Tuesday. FFS the diver is back, or probably never went away. This time...

The guy I met at the gate was not hopeful. It had been claimed, but he had seen nothing. Well since I am here! The reservoir was a still as a proverbial mill pond, with everything bar a diver showing well. A couple of other birders were making their ways round the ressie in different directions to I stayed put. Finally one of them got to me. "So no sign then?", I says. "Oh yes, somewhere between the boats..." He helps me look and a few minutes later picks it up floating to the west in front of 3 large chimney. Tricky buggers divers! 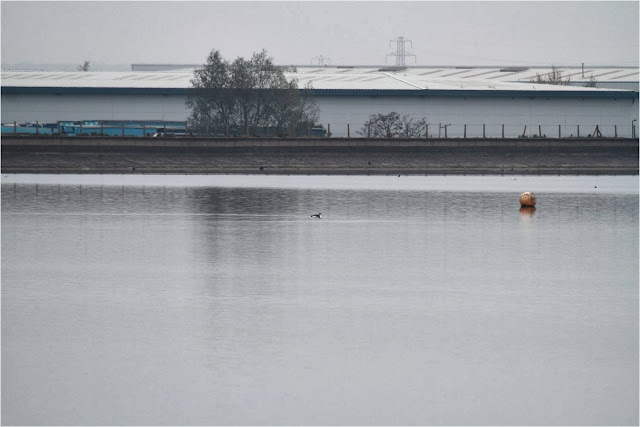 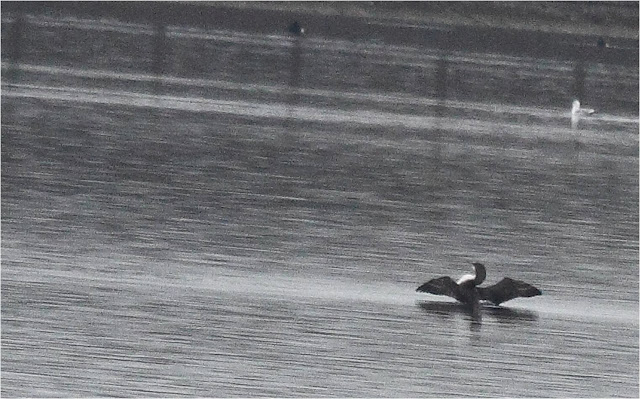 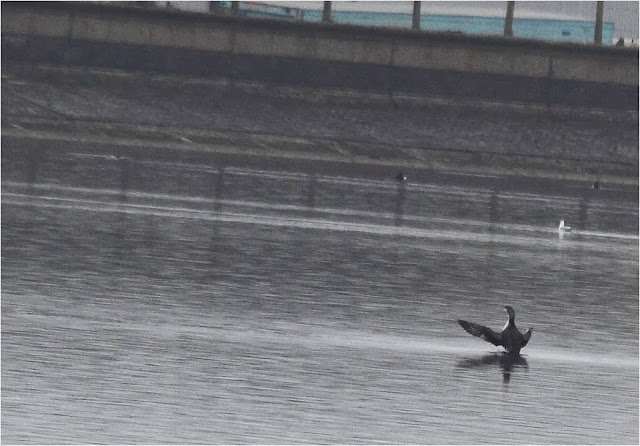 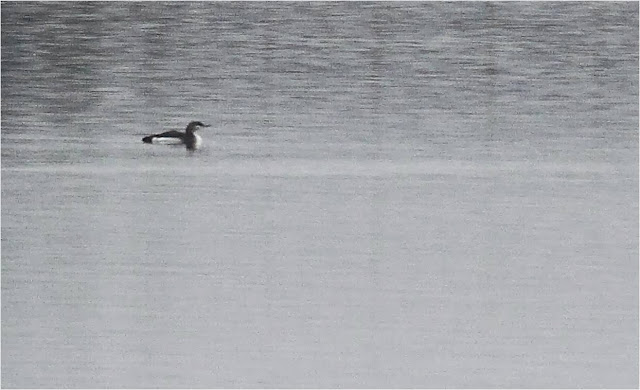 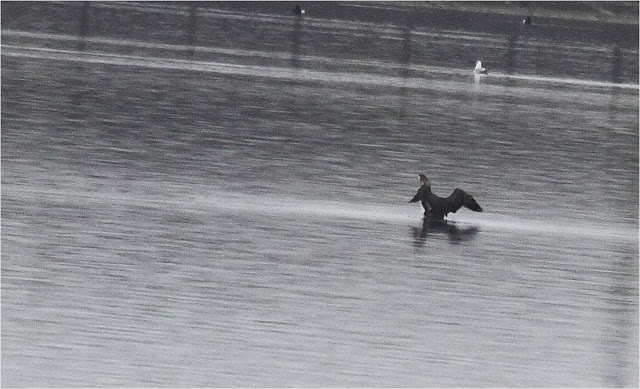 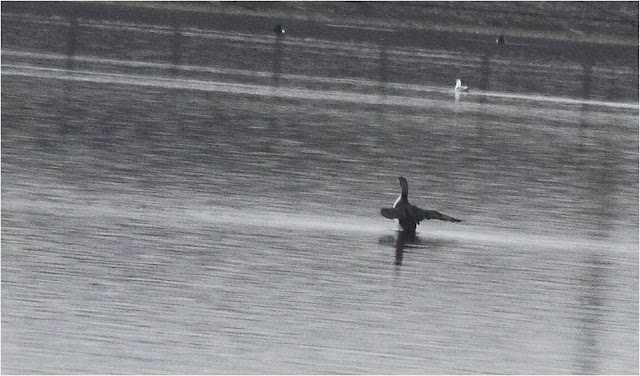