I initially went to this blog to post news on Snaresbrook but honestly can't figure out how to even start that so I think I will go back in time and tell you about Jekyll Island. 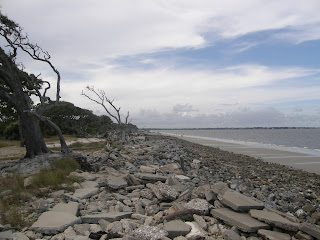 Jekyll Island is off the coast of Georgia in the US in Glynn county near Brunswick, the western side is bordered by one huge salt marsh, rather like a mega Mersea Island. It has a historical site with buildings dating back to the 19th century (wow!) and is popular vacation destination. In spite of this I found the large areas of inland woodland and scrubland dominated by Live Oak very quite and peaceful, even a few hundred metres off the roads.

At the time I hadn't seen a lot of American Warblers (this was 2010) and was amazed at the abundance of Yellow throated Warbler and Northern Parula here, they seemed to be everywhere at least in the summer.

﻿ ﻿
My wife, Margie's sister Julie and her husband Dave Fisher (no direct relation) have a condo here and it was a pleasure to stay here and explore the island for a few days.

One evening, I and Dave went to a lake near a woodland Ampitheatre which had an assortment of goodies including Anhinga, a Roseate Spoonbill, 13 Wood Stork and Osprey. Unfortunately my pictures were not as good as Dave's so I have left them off. Then we were off to the Georgia Pig for some unhealthy tasty pork sandwiches and back in time to feed the local Alligator...

﻿ ﻿
On another occasion I went to the Southernmost point with Julie where there were a few waders knocking about including Semipalmated Sandpiper and Wilson's Plover. The Great Egrets here were particularly tame 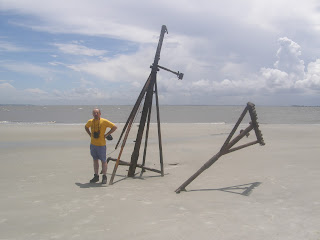 ﻿ ﻿ Another nice surprise here was to find Painted Buntings, these seem to replace the inland Indigo Buntings on the island and I managed to get a good recording of a song of a male at the Historical site.

On the next installment - more from Georgia but a lot more from both the Cruises I went on Mexico and Bahamas.