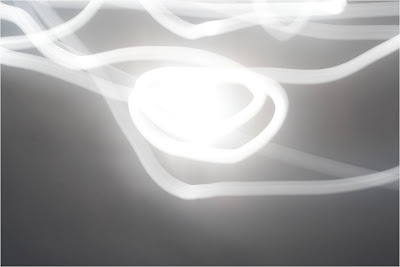 The next day it was ever so tempting to stay in bed and hit the snooze button. A strange bird was calling outside, or at least that's what I thought it was, then again perhaps it was some kind of alarm system, or part of the plumbing.

After a fine breakfast I wandered up to the Garrison. Specifically for the Rose Coloured Starling, but on the off chance the Sub-Alpine Warbler would be "showing well" in the pine walk. Either way the grand plan was to get off St Mary's for Tresco, St Martin's or St Agnes - clean up there and then back for a bash at the long-staying Water Thrush, while keeping the pager handy just in case something unmissable turned up.

A Black Redstart flew from roof top to roof top as I slowly lumbered my way to the Garrison (too much breakfast). Through the gates and then a backtrack, as I was informed I had just missed another Wryneck sitting on the roof of the cell block. Wistfully I watched the bird sun itself before it dove off into the gardens behind. 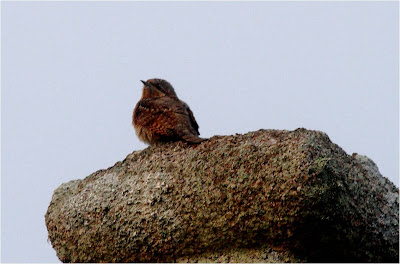 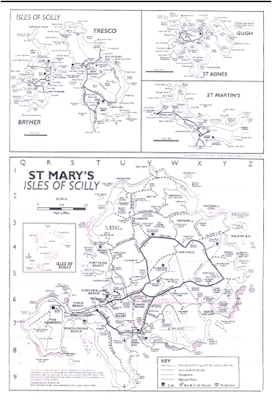 Back up the path to the fort I did a slow circuit coming out at Hugh Town where the RC Starling was meant to frequent. The RC bird was not frequenting. But news of a Raddes in the Pine Walk spurred me on. It too was a no show, but the Sub-Alpine chose this moment to feed along the hedgerow by the football fields giving some good but brief views. 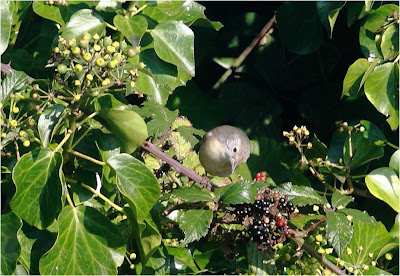 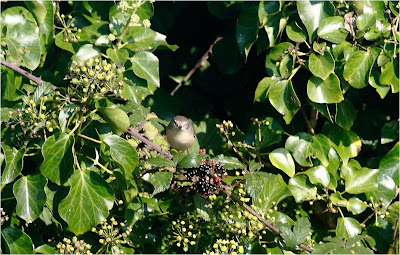 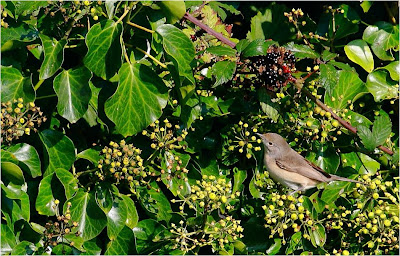 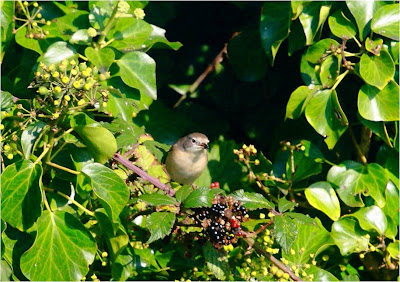 Time was ticking on so I scuffed it down to the quay for the boat to Tresco, the island famed for its sub-tropical gardens. I would have but a few hours here to catch up with the two main targets Spotted Crake (dipped on three occasions at the London Wetland Centre,Rainham and the Ouse Washes) and a Least Sandpiper. 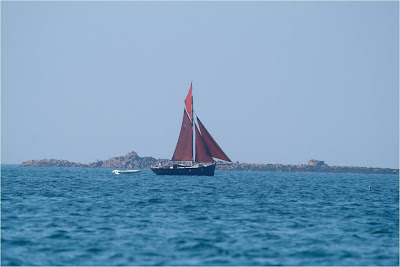 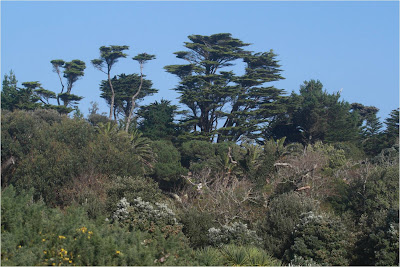 Off the boat and through the dunes a couple of Stonechat were flycatching for insects. All was well with the world until I reached the pool of said crake. for some reason I blundered on to the beach there; perhaps my Shetland approach kicked in - flush 'em, see 'em. It was only as I pottered along the reed edge that I noticed the camouflage of a trio of birders further up what I thought was a deserted shore line. I back tracked immediately.

When I arrived where they sat, the one guy admonished me correctly for behaviour. I apologised profusely. Apparently the bird had been feeding happily by the water until yours truly blundered in like an elephant. I perspired for a while hoping I hadn't screwed theirs and my day. Luckily about half an hour the bird re-appeared affording some great views of this very secretive reed dweller. 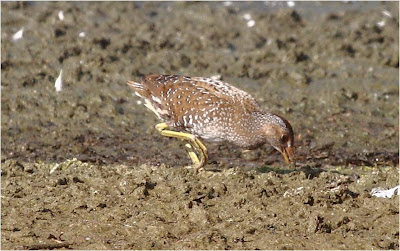 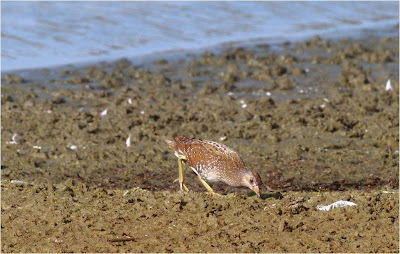 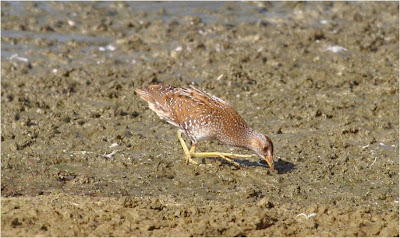 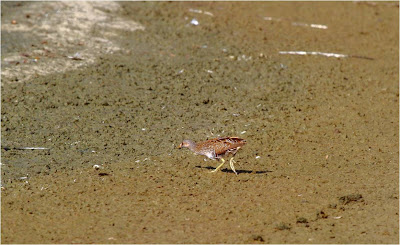 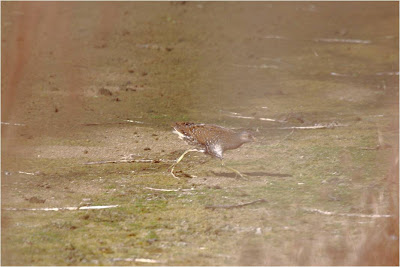 My mood lightened appreciably and after rattling of a good number of shots and behaving myself I slunk off for the Least's. That bird had apparently flown from its shoe-in position on one of the lakes and had now lost itself on the shore. The odds were not looking good. 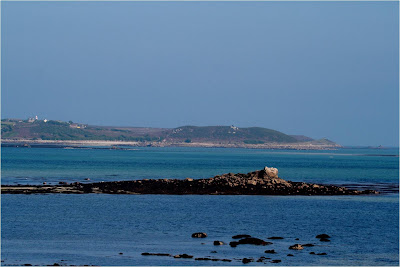 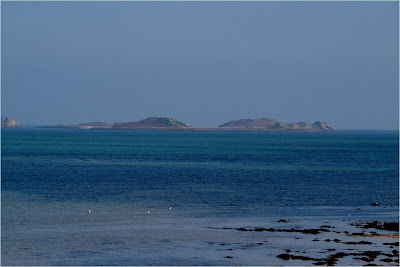 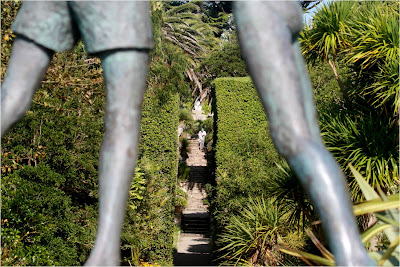 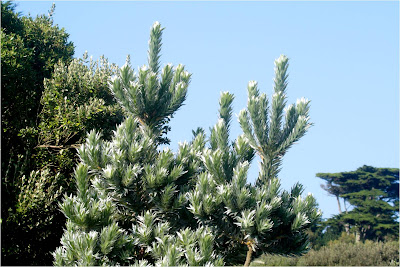 I scoped the nearest section of the beach for a good hour, picking out Greenshank, Curlew, Turnstone, Ringed Plover, a couple of Sandwich Tern and some barwit. No small yank wader. Nor had anyone else seen the diminutive bird, with parties scouring the shore to either side of me. I turned and scoped the pond where it should have been more in hope than anything, but also to get the Lesser Yellowlegs that was feeding there.

It was nearing the time to leave so I thought I'd given the Red-backed Shrike a few minutes on the off chance. No chance. A couple of fly over Siskin and some Gadwall. Some other Least lacking birders came up and we were informed that the bird was showing o the beach between us and the boat. Excellent the very direction we needed to be heading in.

A forced march, brought us to to a point where we could see a trio of birders standing in the seaweed. It didn't look too promising. It's over there they answered to our quizzing. And there it was. It could have been a mile off it was that small. We approached. It did nothing. We approached further. It did nothing. We could have probably approached a lot further and might have got some specs for pictures, but the return boat was imminent. 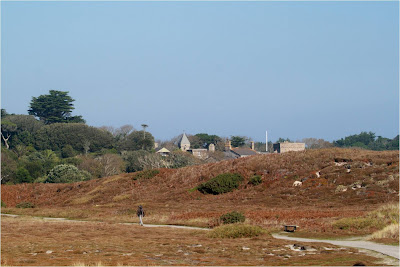 Unfortunately when we arrived back at the jetty. The guy who had questioned my field skills was relating the episode to one of his mates. "... and here's the idiot now!".

His mate chimed in something about respecting the birds and the birders, while dark thoughts rumbled through my head. How about respecting your tripod and camera up your arse sideways. Came out meekly as: "I did apologise..."

I still felt bad and considered throwing myself off the boat, but that would have meant missing supper, and they would have probably turned round and saved me.

I made sure I was last off the boat and hoofed it in the opposite direction when we landed. Luckily in the same direction of another Raddes sighting at Salakee Farm.

Another quick step east up Carn Friars Lane happy faces coming the other way. There was still a sizable crowd when we arrived, just lacking the one thing. The warbler!

It soon reappeared along the field margin and then proceeded to feed in the verge in front of us. Sweet but short fleeting glimpses and at best all ways quite deep in the cover. I went manual. Shouldn't have bothered.

After about half an hour of on and off sightings it flitted over our heads into the farm yard. Time to move on. I decided the less populous route down by Porth Hellick and around the Giants Castle back to Old Town. Beautiful. Not much to see bird wise, nor was there in a quick detour to Lower Moors and the IOS hide. Darkness fell and that meant supper/dinner/food. 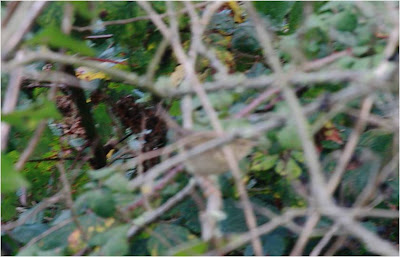 And then it all went sadly wronger. Imagine if you will a Raddes Warbler...
Posted by Nick Croft at 22:56