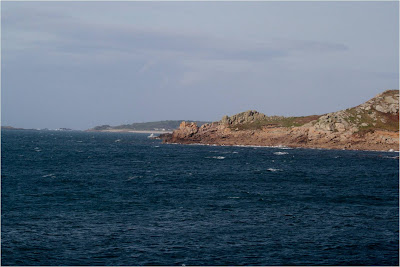 After a hearty dinner of local crab tagliatelle, fresh hake and seasonal veg and a pud, which I forget, washed down with cheapest wine on the list (after all I was paying for that!), I slept well. Up before dawn and out before dawn, I was in place at the ISBG hide before dawn. A plan you see, while all the rest of them would be at dump pool where the Water Thrush would appear first before doing its daily rounds of Lower Moors. Prime position you see. 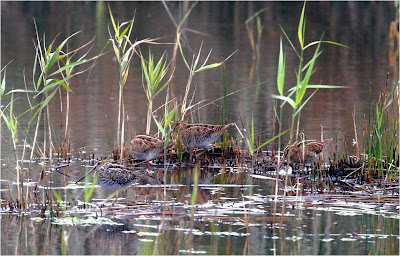 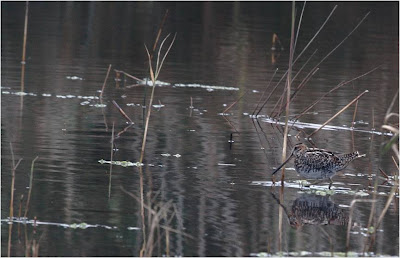 Needless to say the bird didn't show and I missed breakfast. I watched the Wilson's Snipe for a bit and got bit, some showy Water Rails and got bit some more. Looked like it was going to be fabulous day. 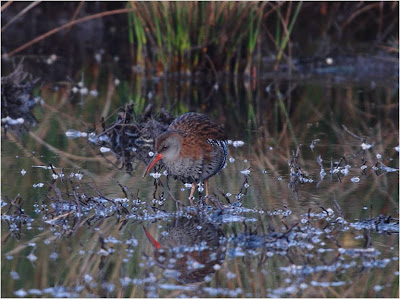 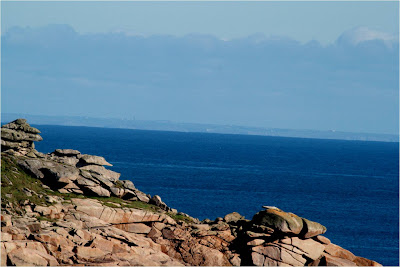 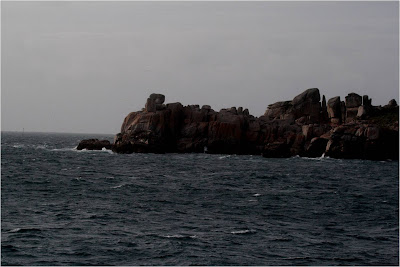 Plan 2 was to eat a hearty breakfast. Bugger!

Plan 3 was to, er, find some birds and explore as much of the island as possible. 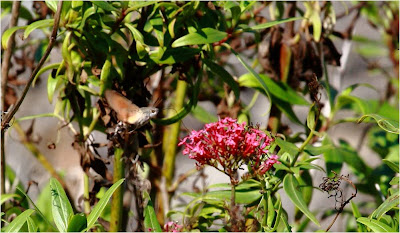 The Rose-coloured Starling was not at home and might have moved islands. Consolation though in the form of a Hummingbird Hawkmoth: extremely good. Moving on. Penninnis Head was somewhere I'd heard a lot about, mostly because its name makes grown men laugh, but also because good stuff gets found there. I found Black Redstart. Actually someone else had found them and left them for those that followed. Either way it would have been good if I hadn't seen Black Redstart virtually everywhere without much effort. A Richard's Pipit had also been found there but had gone. 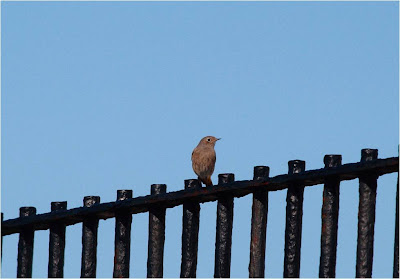 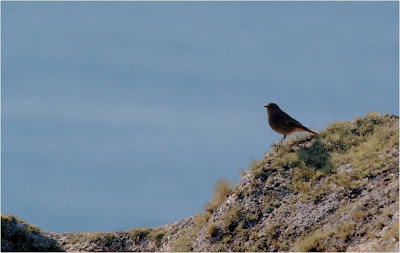 Round the headland there is a little wood the path goes through down to Old Town Bay, just ripe for all sorts of rarities I thought. The fact that no one else had seen anything noteworthy was no deterrent whatsoever.

There were a lot of Song Thrushes! In fact the island is heaving with them, you have to watch where you step to avoid them. I have nothing against the bird, I like them, except for their pink legs. Not right at all. It's just that I paid out quite a lot of money to see things that were not Song Thrush and indeed a hell of a lot rarer than Song Thrush. 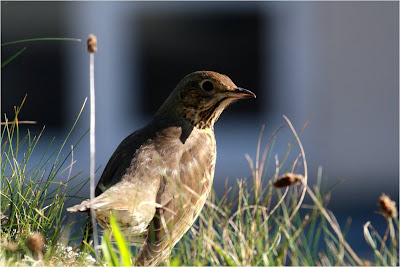 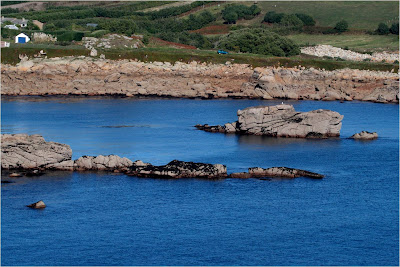 Through Old Town and up to the airfield that had previously held American Golden Plover, Buff-breasted Sandpiper, Dotterel even, just days before - to find Wheatear. Now I have nothing against Wheatear, in fact I love them but..... 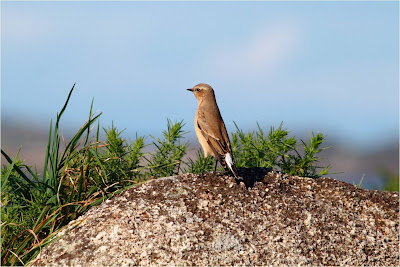 I sat on a tor munching on authentic Ginster's Cornish pie and cursed the winds. Looking up the deserted runway I counted 7 Wheatear and a young man running across the grass. I heard a shout. Was he shouting at me. I hadn't inadvertently flushed anything for a good few hours now, so I was pretty sure it wasn't in frustration at my sitting on a tor eating a Ginster's pastie.

He was now standing in the middle of the heather looking eastward. I tried to get on to what he might be seeing, but it was no good I'd have to go over and find out.

Black Kite's, 3 of them, just soared across from Cornwall. Hmm, I think I've seen these before somewhere. Yup Cornwall! 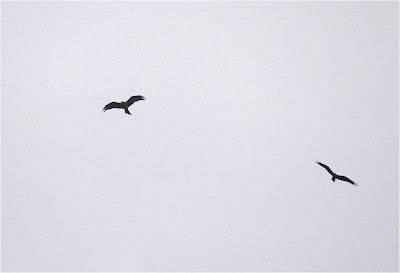 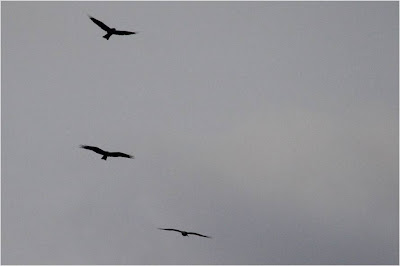 The guy was talking on his radio and it sounded like everybody on the island was getting on to the birds. While not as close as in Cornwall, it was great to see their interaction and their powerful grace as they circled with barely a wing-beat across St Mary's.

Enough, I have birds of my own to find and while I am at it I'll have a quick butcher's at the Blue Throat in Porth Hellick.

A nice place Porth Hellick. It would have been nicer with a showy Blue Throat, but still a nice place. News of a Melodious Warbler at the old school meant that there was no time for birds that want to be elusive when there was one "showing well".

It hadn't been "showing well" for some time when I arrived and for the hour or so after. The crowd began to disperse the Water Thrush having taken over the mantle of "showing well". I would wait it out, from my limited knowledge, Melodious were one day wonders so if was to be it would have to be tonight. A Great Northern diver flew over. Ooh year tick! But as for the warbler nothing. It was getting late and I still had to get the WT, either tonight or in the morning. I caved in and hoofed it round to the dump. 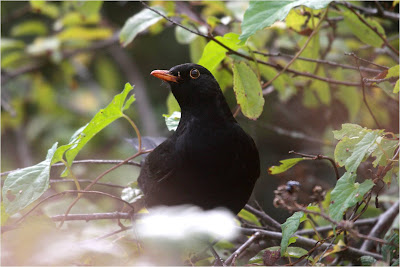 Another plan. If I didn't see the bird tonight then at least I would no how to find my way to the pool before daybreak the next morning. Ingenious. When I arrived I was met by people on their way back and the news that the bird had flow off. Not to worry it had been seen as late as 7 PM previously. Those words from Dick Philby, so gospel then.

There were just four of us at the stinky little gnat infested pond, then three, two and just me and the flies. It was getting darker. A Water Rail edged round the pool just below me, the last of the Swallows had passed over on their way to roost and it was getting quieter. Just a bit longer, Dick Philby said...

A small movement at the back of the pond in the gloom caught my eye. And there it was and, even in this poor, what a stunner! It came closer acting like a cross between a wagtail, dipper and flycatcher and for ten minutes I watched ignoring the increasing number of singing insects in my ears. Then as it came it was gone. 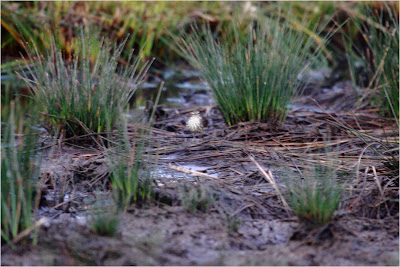 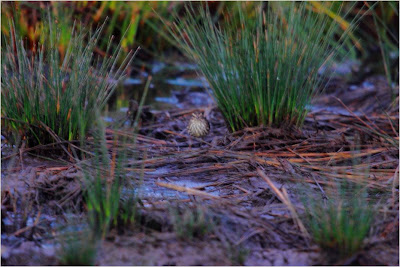 My pictures were truly bad, so the new plan for my last few hours on the island tomorrow would be: Stinky pond for better pictures. Breakfast. Medodious and anything else I could stitch up before the Scillonian left at 4:00.

And so it came to pass. 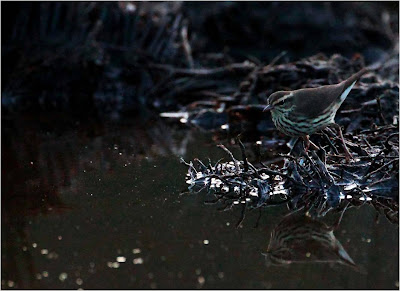 That nice Mr Lethbridge let me use this 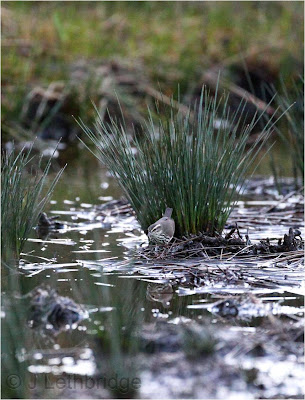 ...and this one too. Can't see the difference between the 4 shots myself
Water Thrush eventually showed well (the picture bit didn't quite work out). Breakfast was had, and after a few non-starts the Melodious gave itself up to my appreciative gaze.

And that was kind of it. A few hours to kill, not enough time to do something properly and more than enough time to be at a loose end. It is always thus at the end of things.

Best bird: the Pom Skua I found off the back of the boat on the way back, so close I could have kissed it, so close it would have been a great shot but for the camera being in the bag and somewhere else on the boat. 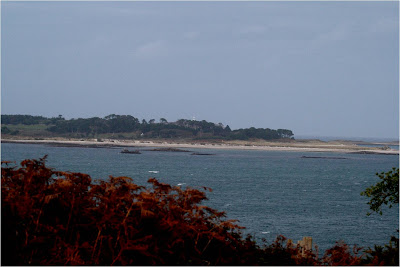 Self found birds: Pom Skua, er that's it. I am a tart.
Next time I'll find them. 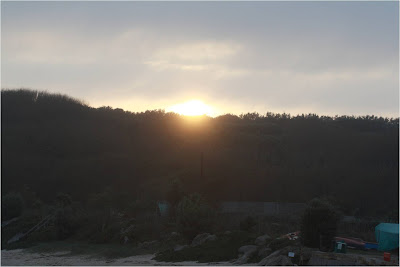