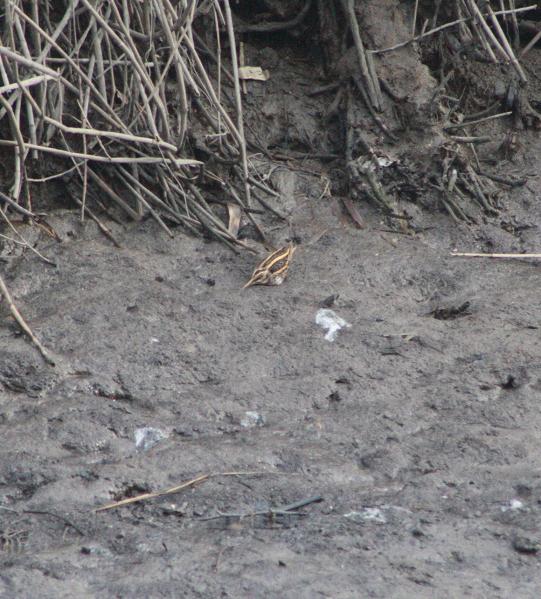 I'm not very good at this blog thing but I'm going to give a rundown of some of the more intresting sightings I've had in the last few weeks. Up to the cold spell, Abbey Creek in Bromley-by-Bow had been attracting the usual species at this time of year, 200 Teal, small numbers of Redshank and a regular Green Sandpiper. When the cold spell hit on the 4th and 5th of Feb the place started to get interesting as it did last year. Once everything freezes everywhere else, birds tend to drop into the tidal Creek. Compared to last year however Snipe numbers were well down, only around 10 max compared to an amazing 45 in the harsh winter period December 2010 to Jan 2011.

A vision the Sunday morning of the 5th Feb this year after the snow fall produced the 2nd ever Merlin for the sight (a male) which was unfortunately seen off by a noisy Ring-necked Parakeet (which incidentally is also a rarity here, especially perched!). Also I forgot to bring Nick's camera with me and only had my phone, which is even more gutting because scanning the mud below the Channelsea Business Centre I found a Jack Snipe amongst a few Common Snipe.

As the tide came in this ended up right up in the corner of a sluice below the Business Centre at about 30 metres from me standing dead still! I did manage to get a picture at a later date of another or the same bird on the island bank, rather distant but good enough, this despite it's cryptic camouflage stood out like a sore thumb and looked rather comic standing dead still with it's front end pointing towards the mud.

Last year in January there were 2 here and one day they were feeding with all the Snipe and 2 Water Rails right out on the mud in front of the Channelsea Business Centre while people had their cig breaks, seeming relatively unconcerned (the birds that is).

Also on the morning of the 5th, a record number of 130 Lapwing going over in 2 flocks plus one bird feeding on the Creek, 7 Skylark over. Redshank numbers peaked at 15 I think.

Also of note during this period were up to 5 Shelduck on the river, a record number of Gadwall (at least 94 on one occasion), and regular wintering Chiffchaffs, up to 6 before the cold spellwith one bird singing and 2 remaining during the cold snap. But no sign of the controversial Chiffchaff which I and others think looked good for tristis. Not since early January anyway when it was very elusive. 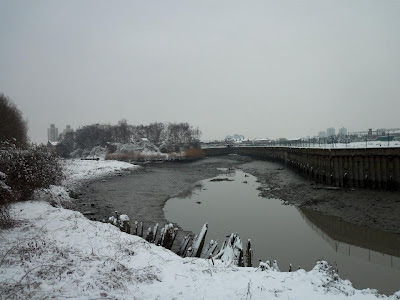 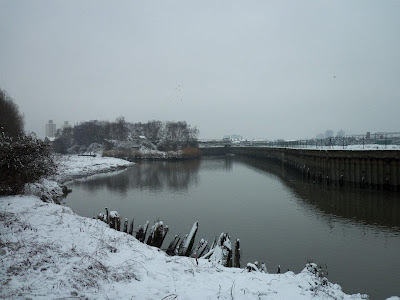 Other news - a trip to Walthamstow to see the Bittern finally paid off when at first things looked very unpromising. Must have spent a couple of hours or so walking up and down the Coppermill Stream with a fellow birder, Noel without seeing any sign of it.

Okay plenty of other stuff about, 2 Water Rails calling along the stream and a resident Kingfisher and up on the West Warwick a drake Scaup. We then went up to have a look for the drake Smew on the Maynard but had no luck there either and so Noel decided to go home.

I thought I'd have a quick look back at the Coppermill just in case it had turned up. But again no sign of it, I was beginning to hallucinate Bitterns after a while, all many of plant debris turning into a Bittern. However my attention was drawn to a lot of noise from the Gulls on the West Warwick.... a raptor surely... must be a big one by the sounds of it.... coming this way, passing, gulls just about visible chasing something, bloody trees in the way.... erm! then looking from behind, big brown bird, floppy wings, a Short-eared Owl, no errm!


It did an abrupt u-tern, yellow legs dangling, wow the Bittern! Pursued by 50 Black-headed Gulls and 2 Lesser Black-backs and went down under a tree on the stream where I got the pic below..... 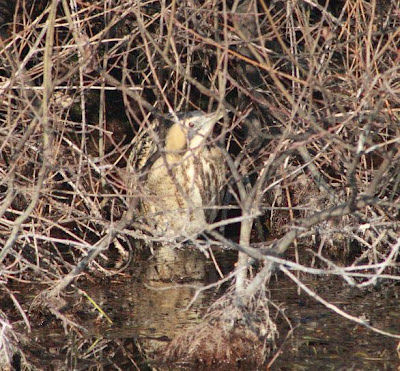 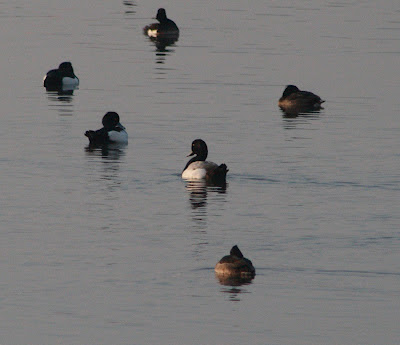 Email ThisBlogThis!Share to TwitterShare to FacebookShare to Pinterest
Labels: http://1.bp.blogspot.com/-stQ31_HuRWI/T0eriVCez1I/AAAAAAAAAwE/6bDnNYY_JdU/s320/Jack%2BSnipe%2B4a.jpg