Scotland 2011. Part one: Getting it all wrong in Glen Einich 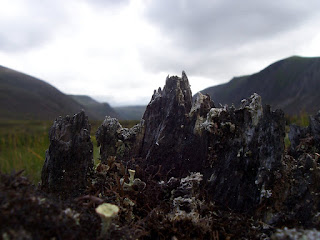 I don't get up to Scotland nearly enough, but I have been managed to make it up there twice in the last two years. Last August I went back to Skye and Harris via Aviemore.

Caught the overnight coach from Victoria and arrived at 11am, had some breakfast and set off to Glen Einich, this was going to be a breeze. I took the path through Rothiemurchus Forest towards the Cairngorms Club Footbridge then waded the river and headed deep in to the forest in the hope of seeing Capercaillie.

The weather was rather still and humid and it was clear from the start that I was going to have trouble with Midges. The Capers had certainly been here as I found some droppings and feathers under several upturned tree stumps but the forest was eerily quiet apart from a lone Red Deer and a small party of Crossbills, sounding rather like Scottish to my ears. 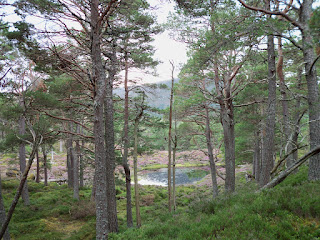 This part of the forest is quiet and remote and it always feels as if something is following me, and it probably is in all likelihood, unseen. It could be a million miles from the main paths that take the cyclists up to the Lairig Ghru or Loch Einich, now conveniently removed of all boulders, rocks and dead wood and horribly smooth and characterless, compared to when my brother, Grant and I used to walk here in the early 80's.

I stopped at the forest edge overlooking the river and contemplated camping there briefly, decided against it and slogged on across the moorland heading on up the Glen to my 'old' camp spot under the smooth granite dome of Braeriach. A couple of Red Grouse went up noisily but very little else did I see over this moorland. 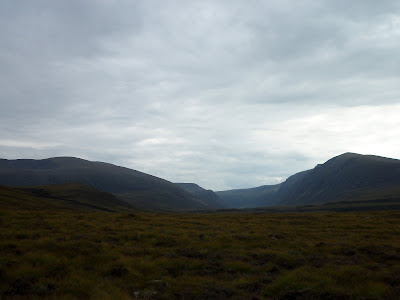 When I finally got there I was exhausted but crossed the river and got to the other side. Now, I have seen lots of midges before, most notably in Glen Shiel but nothing prepared me for the clouds that began to arise from the damp boggy grassland on the other side. I tried and failed to put up the tent. The more I bent down to put the pegs in the worse it got, like wearing a blanket of midges, I was choking on them and after about thirty minutes or so I started running about, face burning, no longer me but some strange ancestral version of myself shouting in a guttural pictish language like so many people had probably done before me.

Strange wailing noises came from my voicebox, did I make that? Who was I? Was I possessed? My imagination ran wild.

This, of course was the normal initiation ceremony upon first arrival to Glen Einich, it has to accept you and you have to accept it.

I finally gave up and climbed up a tiny brook on a mound, only to fall awkwardly so that I was almost upside down and wedged into the sides of the brook and it took a lot of my effort to get the right way up again. This wasn't going very well, this initiation was taking longer than normal, I felt rather pathetic, only seven miles or so from civilisation and look at me!.

Better toughen up a bit boy! I finally gave in and camped by the river near the main path, didn't want to but I ended up there. I made a nice dinner of sardines pasta and curry sauce topped with a thick layer (I kid not) of dead midges mmmmmm...... well at least there were only hundreds of thousands here, I could relax. Then realising it had taken me all afternoon to get here I decided against going up to Coire an Lochan as planned and had a leisurely stroll down to Loch Einich in the fading light.

On previous occasions I had gone up Braeriach at dusk, not all the way up, but enough to get a good view. Last time I was here I took part in a Ptarmigan survey, finding seven one evening. I heard a lek of Red Grouse in the Glen on the way to the Loch, a species that had appeared rare here for a while it seemed. From a distance it sounded like demented laughing, what would the first inhabitants of this area have thought, mind you then the Glen was probably forested and full of bears or wolves.

As you come towards the loch the cliff buttresses of Sgoran Dubh Mor become more foreboding and on the east side there are the more gentler slopes of Braeriach and behind that it gets steeper again... there is a path running up the east side to the top that turns in to a cliff at one point, but it is fairly easy to climb up when you get there, if I remember rightly, having been up there botanising some years ago.

The back of the Glen gives the impression of an amphitheatre and looks steep but again it is reasonably okay to climb up one of the stream valleys to the top and it is nowhere near as steep as it appears from a distance. Though, once I did fall when a mica-schist scree slope shifted sending me down into the stream, luckily I had a plastic flask in my pocket which protected my hip as I landed on a sharp rock and got away with a few cuts and bruises, the flasked was smashed, of course. That did shock me though, but Alpine Speedwell seemed worth it at the time!

There are some fantastic puddles and pools along the path edge, some quite deep, still water reflecting the sky, broken only by a faint wind or a pond skater scuttling across the surface, the air from the south is cold and fresh and time seems to come to a stop. I am nothing. God, I am so small, that kind of feeling.

But now it was quite dark, the weather was changing as some dark clouds were typically looming over the Glen from the south. So I went to the granite beach and took some photos in the dark, all crap I''m afraid. Then I headed back to the tent.

Sleep quickly overcame me and I drifted off, after what felt like hours but was actually only one hour, I was awoken by that dreaded sound of heavy rain on plastic, I felt unusually cold too, cold and....err wet, Shit! The tent was full of water, I panicked a bit in the pitch darkness, making those ancestral noises again. Then I got everything dry I could find in to a plastic bag (good thinking). Earlier, in my haste I had not been able to put up the tent correctly and the inner and outer sheet were touching, creating a rather effective tap I'd say, water was literally pouring in from where it had gathered on the outside. There was only one thing for it, get out, pack up and go. That's what I did, whether that was the right thing to do or not.

As I walked back my spirits lifted, the rain had eased and walking in the dark at 1 in the morning was great. I could see some stars too, lots of them briefly. A quick swig of whisky, and another. No owls, oh well. I negotiated the tricky bits (the bridge that is) using a tiny mouse torch that Margie had given me, the beam of which seemed more like the beam of a car head light, very useful.

There was a really odd moment that gave me the shivers when my imagination went rampant again. The light pollution from Aviemore to the north was playing havoc on my eyes, at one point I froze when I saw what looked like a hovering glowing object in front of me above the path which turned out to be a puddle reflecting the light and of course the ground wasn't visible so it did appear as though it was in the air.

Oh look, a fairy, ..... errr actually that may have been real and it probably appeared that way to many before me, even before street lights and light pollution - it's all in the place names.

In the next instalment I head up to Skye and Harris and see some birds, so keep posted.