In Search of the Invisible Nuthatch 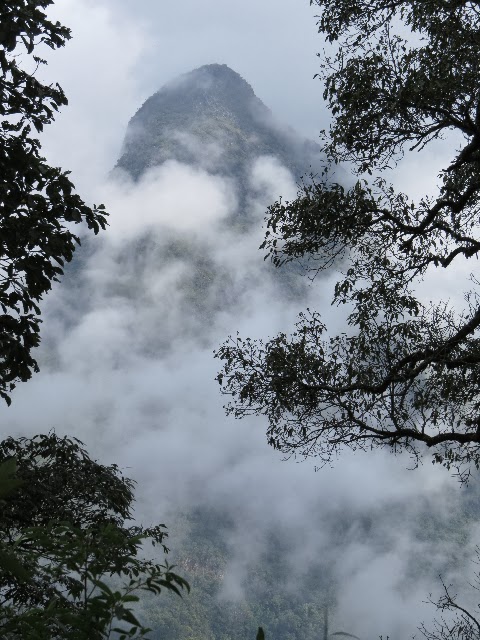 The summit of Doi Chiang Dao makes a rare appearance through the clouds.

The vehicle slewed across the muddy slope like a duck landing on a frozen pond, then ground to a halt, its wheels spinning without traction. We were stuck. No doubt influenced by the fact that it was still dark and we were miles from the nearest habitation, I was beginning to think it had been a mistake to set out up one of Thailand’s highest peaks after a night of rain. But doubt had to be banished, since we were on a mission to find Giant Nuthatch if we could. This species is found over a large area of south-west China, a slice of eastern Myanmar and a corner of northern Thailand. Yet, according to BirdLife International its population falls in the range 1,000–2,500 individuals. In other words, it is extremely thinly spread and very fragmented, surviving in open mixed pine and oak forest above 1,000 metres. It is endangered and its population is still in decline. The shoulder of Doi Chiang Dao is one of just seven known sites for the species in that country.

I managed to reverse the four-wheel drive vehicle out of the deepest mud, activated the diff-lock and tried again. We inched forward through the mudbath, and eventually reached an area of better traction. The process was repeated several times but after almost two hours we reached the end of the track, where there was a small area of – thankfully flat – open grassland surrounded by pines, 1,400 metres above sea level. Although most of the journey up had been in darkness, sunrise had us turning a bend to see three Mrs Hume’s Pheasants close to the track. Neither of my companions, piciphile Gerard Gorman and lensman Neil Bowman, were able to get shots of these birds but all three of us were happy to get our bins on this near-threatened species, whose numbers have fallen as a result of habitat degradation and hunting. After dawn and away from the track, the chances of seeing it are virtually non-existent.

For the rest of the day we walked back and forth along the top kilometre of the track and around the grassy area, listening for tell-tale taps on wood or sharp calls, and watching for any movements up or down pine trunks. The area was certainly not bereft of birdlife: a White-browed Scimitar-Babbler pulled bits of bark from a fallen tree in its quest for spiders. Several Grey Bushchats and a male Daurian Redstart flitted after insects in the grassy area. Mrs Gould’s Sunbirds fed on a patch of yellow flowers. But nuthatches there were none.

The descent down the mountain was certainly easier than the morning’s climb, not least because it was light, but it was done in the knowledge that we would have to repeat the journey the following day …

Seconds out, round two

And so we did, although the reprise was not quite as treacherous. Gerard, disappointed with the lack of woodpeckers the previous day, had gone off elsewhere, so the responsibility for finding Sitta magna fell to Neil and myself. There wasn’t another birder anywhere in the vicinity. Our hopes were lifted mid-morning when a series of calls announced the arrival of a bird wave, moving through the pines just in advance of a bank of low cloud. After staring at empty trees for hours we suddenly had to identify dozens of small birds simultaneously: phyllosc, Lesser Racket-tailed Drongo, phyllosc, phyllosc, Stripe-breasted Woodpecker, phyllosc, phyllosc, White-browed Shrike-Babbler, phyllosc … nuthatch! Bullseye? Sadly not, it was Velvet-fronted, the wrong kind of nuthatch, though still a nice bird. Another Stripe-breasted Woodpecker and the wave had passed over. Back to empty trees. Of course, inevitably in these waves you miss as many birds as you identify. That was our consoling thought, anyway; maybe we’d get our quarry if the birds returned …

We walked down the track, up the track, down the track again. Eventually I heard what I thought was a Giant Nuthatch, but the call stopped and we couldn’t set eyes on the bird responsible. Anyway, I couldn’t be 100% sure that the single notes weren’t being delivered by another species. Again, there were other good birds, including Blue-throated Barbet, Mountain Imperial-Pigeons, Streaked Spiderhunter and Grey-backed Shrike … but not the one we really wanted. An hour before sunset we accepted the inevitable and began the long, slow drive down the mountain, knowing full well that we didn’t have time to repeat the venture a third time. Tomorrow we had to move on to Doi Ang Khang, another of the seven sites. 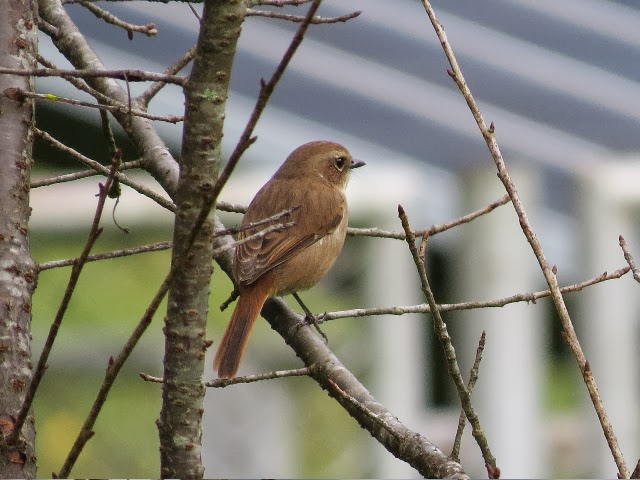 A Grey Bushchat near Doi Chiang Dao.
Posted by Nick Croft at 11:13