Last year I had planned to get up to Scotland in May, not only to avoid the midges but also to score big on Scotland's finest specialities; and yes to finally get my first Osprey (the shame of it all!). Unfortunately work, again, ruined my plans. Seeing as we had just been taken over, I thought better get my feet under the desk before I start taking holidays all over the place.

A year later my feet are well and truly rooted under the desk, and Scotland beckons and what with a plethora of bank holidays and rich people's weddings a good time to avoid television and the media and journey north.

Hastily booked I find myself on a train to Scotland after having spent the morning on the flats, not quite what I envisaged, but an opportunity to see the highlands from the train in daylight so a workable compromise. Actually a solitary Red Grouse was the sum total of the workable compromise, however it was the only RG I saw the whole time so: get in there! 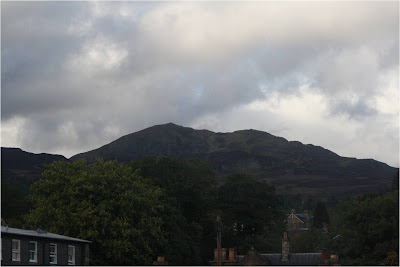 on the way from the train 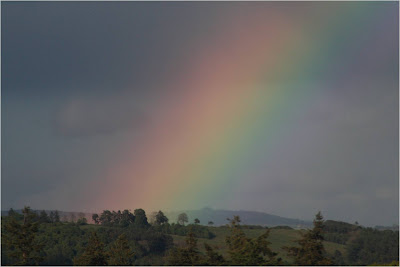 Arrived in Aviemore at aboout 6:00pm time enough to dump my bags in my upgraded hotel room (upgraded!), and head out and get my bearings. I ended up by the river close to a Sand Martin colony, a Common Sandpiper fluttered off upstream while I could just about make out the call of a Dipper over the sound of the river. Then it got dark.

It had been impressed on me that to see lekking grouse one would have to get up well early to arrive on the lek for kick-off. Now that I was here I considered the logistics. Considering I was on foot, miles from any likely sites I calculated I would have to get up half an hour before I went to bed to be in with any chance of reaching even the nearest site on time. With that thought I went to bed. It was probably the self same thought that woke me in time for a large help-yourself breakfast. The accommodation may not have been of the highest order, but the breakfast in volume alone could not be faulted.

Having ate my own weight, and let my belt out several notches I rolled off armed with a plan, or rather a plan that Mr L had thoughtfully constructed for me prior to my departure. Today I was staying close to home; first up Craigellachie, a wooded walk up on to the moors to the west of Aviemore. Here my annotated map promised (singing) Wood Warbler and Peregrine nesting on the cliffs. 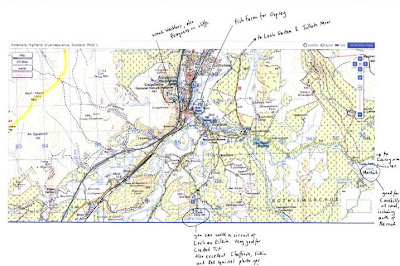 The Peregrine watched me as started to climb into the mixed forest of birch, pine, oak and rowan. I drew a breath heavy with the flavours of the damp understorey and the magnificent trees and immediately felt a immense feeling of well being. I was going to enjoy this!

Luckily for my stomach the path climbed steadily with few gradients to cause me to rue shipping so much bulk. I was going to survive breakfast. 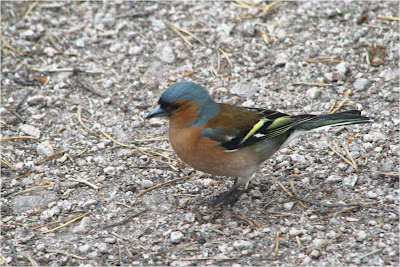 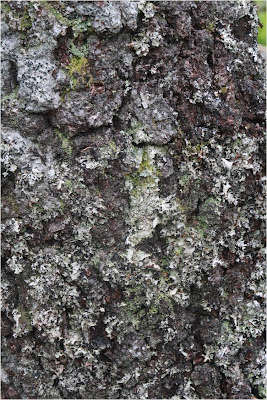 It wasn't long before I heard my first Wood Warbler, and soon I had picked him out from the soft greens of the birch leaves. Having spent many an hour chasing tit flocks around the park last year in the hope of an interesting warbler such as this, this was easy and better still to see them in their ideal habitat. That applied to the singing Common Redstart further up the track, incidentally my first outside London and the South East, and the vocal Tree Pipits up in the canopy. I was mildly surprised to hear Cuckoos, but that's more to do with ignorance on my part than the Cuckoo's fault. 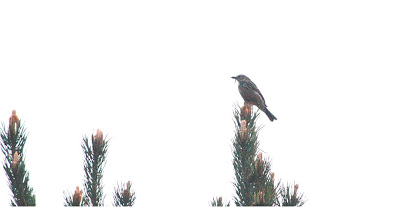 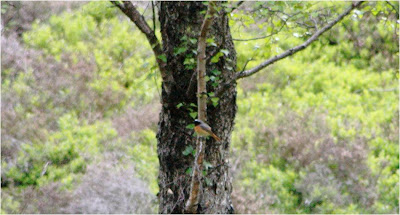 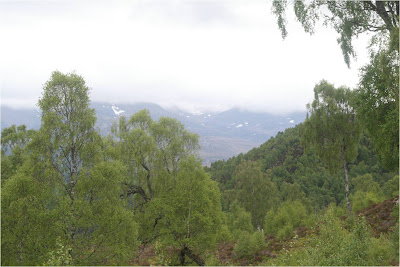 As I climbed breaks in the trees afforded me some views to the east towards Cairngorm. Somewhat different to Wanstead I would say. Against one of these vistas a juvenile Golden Eagle sought updraughts from the ridge as it drifted north; obviously one of my targets birds, but not so common as you might expect round these parts. 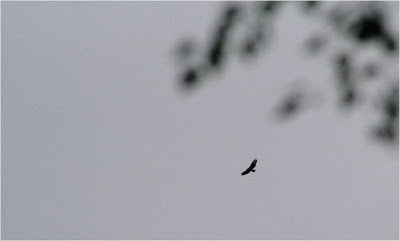 Beyond the tree line now, leaving behind the ubiquitous Chaffinch which carpet the forest floor, and the moor is quiet. I had been expecting the "go back" calls of Red Grouse to be everywhere, all I got was the seep seep seep of Meadow Pipit.

Meanwhile the track is becoming busy. Where did all these people come from? One a local stops to pass the time of day, while I gently grill for local gen on leks etc. It appears there is one on the other side of this mountain accessible by road and track. It sounds promising. More promising is the large raptor approaching from the west, flapping slowly across our field of view. Blimey! an Osprey, shamefully my first ever, ever. Even more shamefully the only bloody one I saw all trip, and no I am not counting the images from the Loch Garten Osprey-cam. I can tell you I would have been pretty pissed off if all I'd got for this trip was some second hand television.

Having reached the top of Craigellachie it was time to go find some Crested Tit, and they my helpfully annotated map suggested would be more likely somewhere lower and woodier, say Loch an Eilein.

On the way down got close and personal to a busy Treecreeper with some mouths to feed nearby and my first Spotted Flycatcher of the year, again interesting to see a bird in its bredding context as opposed to in a migrational contehiext on teh edge of Long Wood. 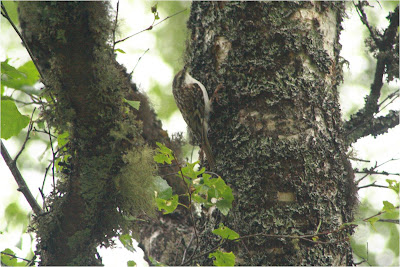 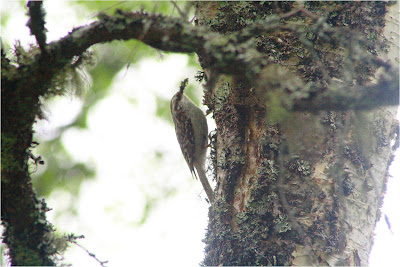 On the way to Loch an Eilein I had been recommended by many people to try out the Rothiemurchus fish farm, where for a small financial contribution you were almost guaranteed to see fishing, sitting, preening, all singing and dancing Osprey. Having read this far, you'll know the answer to that one. 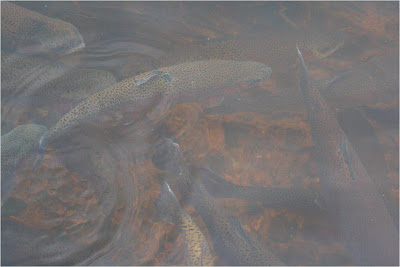 So a small financial contribution for a shy Sedge Warbler, another Common Sandpiper, and a fly over Goosander and the constant rain added to the overall shittiness of it all. On the way out a Dipper tried to chear me up with a little fishy wot it had caught. 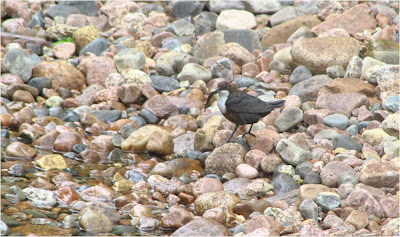 For all the great habitat around me I was surprised how little I actually saw; Day one and I am struggling to get to 40 species, yet I was excited with anticipation virtually every minute. "You can walk a circuit of Loch an Eilein. Very good for Crested Tit. Also excellent Chaffinch, Siskin and Red Squirrel photo ops at feeders new car park kiosk marked 'x'", says the annotation. After picking up another couple of Wood Warbler at The Polchar, it all went a bit quiet. True the weather was a bit iffy, rain, wind, bit of sun, bit more rain...

Great walk, can't fault that. Tree Pipits were good, a Blackcap in a croft garden, Wigeon on the loch (again something I should not have been too surprised about, but was), a pair of Goldeneye, and Coal Tit, Willow Warbler and Chaffinch everywhere. No obvious Crested Tit, though I did get one calling but nothing came out of the constant drizzle. Do you know I wasn't that bothered, I was enjoying myself and would come what may. Besides I had another curry to look forward to and breakfast tomorrow, and who knows what treasures the day would bring. 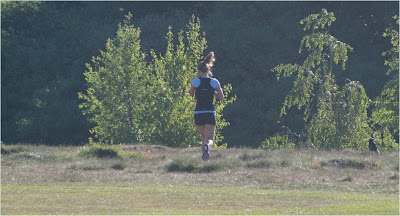