One day pass, and why breakfast is not good for you 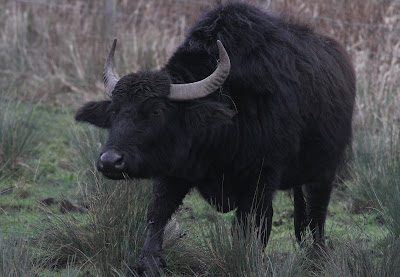 Having not had time to go to Dorset to nail the Hume's and the Richard's, I thought to nail them this weekend on my Jack Jones, then scurry back up to London and back out to Dunge to grab a few year goodies there too. Sounded like a plan. Just to make more interesting I changed it. Dunge first then to Weymouth for the night, up before dawn to get in position for the daybreak showing warble.

Planned times on line, should have booked online, but didn't. First bad move. Arriving at Stratford station at 6:15 found the rail ticket office closed, London Transport unhelpful and the ticket machines trying to steal all my money. At 6:30 the ticket office was still shut tight and not showing any signs of opening at its allotted time. Crap! 6:45 went, and so did the fast train to Ashford. Time for a serious rethink. Norwich = Lesser White-front, Waxwing..., Southend: Purple Sandpiper, er... I opted for a one day travel pass, which took me by surprise.

Now the plan was to hoof it to Chigwell and Connaught Water (Mandarin), back down to the William Girling (Black-necked Grebe and maybes...), one of the Lee pits for Smew and who knows...

Bit of a come down when you stack it against Dunge: Great White Egret, Long-tailed Duck, Smew, Slav Grebe and stuff... but it would be fun!

First up CW: Nuthatch calling in the trees, Goldcrest flirting with singing and all the tits present and correct. Came in from the north end of the lake, it appears the Corporation are cocking up paths here now judging by the scene of incompetent industry.

Nice numbers of Teal pretending to be displaying, while larger numbers did what ducks do best: sleeping. Mallards, Tufties, Pochard, female Hooded Merganser, Mute Sw(waaaat!). There she was in all her afro-headed finery, and come to think of it I do remember reports of this, ages ago though. So obviously the real deal, like Radipole's bread loving louche. Apparently another of Hawky's finds. 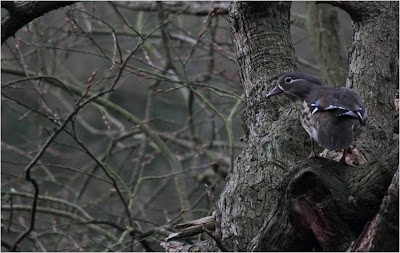 My quarry was behind this surprising North American duck. A couple of males lounged on a log. Scanning the bank of the island I picked up more of the gaudy males and some of their more refined female counterparts. I counted 8, which I thought quite good considering it was way the highest number I had seen here before. Then another party of 10 whispered their way over my head to land not far off. I had heard numbers of this duck were falling in the forest, which would be a shame as they do brighten up the place somewhat, and the females are very pretty. 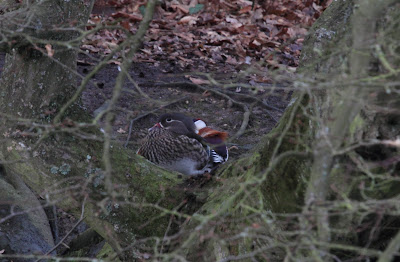 After checking a Great Crested Grebe, just to make sure it wasn't something a tad more interesting and not on my year list. It was back through the Redwing infested woods to Chigwell. Luckily a bus was going my way, next stop W Girling.

From the top of Mansfield Park I managed to cover most of the reservoir by moving around. Ther actually wasn't much on it and with the wind coming from the west, what was there was sticking close to the western side as far away from me as possible. As good as the Swarovski scope is, the magnification leaves a bit to be desired. Another 30x to be desired. Clear though. So I clearly had small black and white dots on the far side of the water, which were discernably smaller than the tufties. Then I picked out a small raft of likely grebes, in amongst the more obvious Little and larger GCs.

Good enough. Off via Greggs (product placement opportunities on offer), to Ponders End for a train to we'll see where it goes. To the west of the King George V res, hundreds of Fieldfare were feeding in the hawthorns and on the paddocks, amongst a similar number of Chaffinch (I checked, no Brambling). Fieldfare remind me of plumb crumble, where the juice has just soaked through the topping. No, just me then! 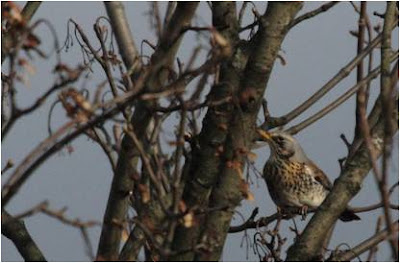 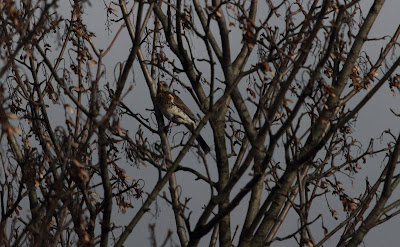 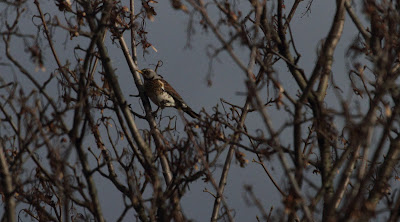 As luck would have it a train arrived as I did at Ponder's, Hertford bound next stop Amwell then. More likely for Smew.

The viewing point was largely empty, one guy waiting for the Bittern to put in appearance. He had had a Little Gull that morning, which was now down at Cheshunt. Promising! The Smew (4) were still on Tumbling Bay (have I said I like that name?), but not much else. He was right a couple of Goldeneye and the usuals. I bade him farewell and wandered down to Tumbling Bay,behind a bunch of arsey kids, their fat mums and shitty dogs. Luckily their stamina ran out and they had to return to their car and thence to their fridges no doubt.

Tumbling Bay was the usual mass of Tufties, Pochard and Coot, all trying to look interesting, but failing to be Smew. I pondered the unfairness of life for a moment. Then I saw a beautiful red-head as she flew away from me into a pack of Tufties. Life is great, and being shallow has its advantages. 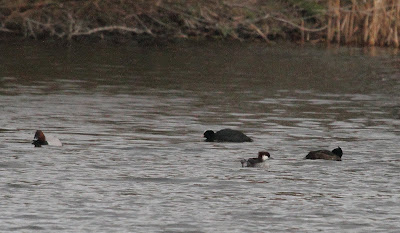 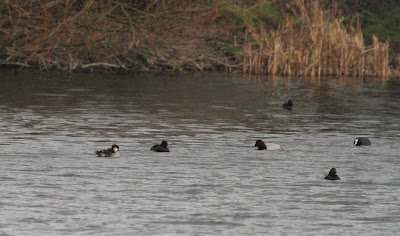 I can get closer than this I thought and scooted off down the path, meeting two guys coming the other way. Hadn't seen the red-head, but a drake was further down by hiding behind some trees.

Not when I looked he wasn't ha ha! 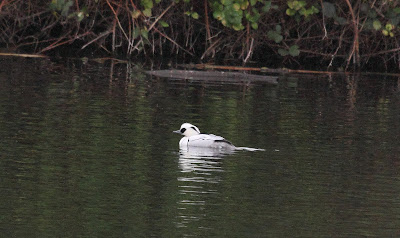 Having raised my blood pressure somewhat I rushed for the train: perhaps I could catch the Little Gull over Cheshunt. Yeagh right! Or have a quick look at the scrape at Rye for some wader action.

The scrape at Rye House had gone, just a few bits of grass showing above the water. Apparently the scrape had been just one of those things, as the powers at be tried to rid themselves of invasive pests and invigorate reed growth as part of the Herts reed bed project. So it appears the scrape will be no more. The did have a Bittern in last winter though. Good, but I wanted waders...

I'll be back for a bit of rustling. I fancy a small herd of Buffalo on the flats, and the Konick's cos they are pretty. 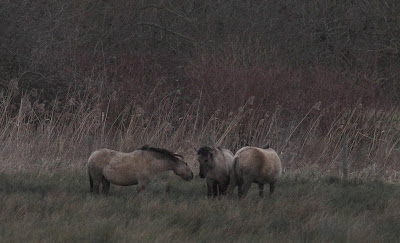 The race down to Cheshunt proved fruitless, bar 2 Water Rail and a large number of Jackdaw off to roost. So to part 2 of the cunning plan.

To Dorset. Booked ahead to my old resting place of the Rex, just on the sea front. Handy-ish for Wyke Regis if I got an early start and missed breakfast. The night porter said breakfast is at 07:30. I crumbled, my stomach rumbled.

And that as they say is where it all went wrong. Should have used the early morning darkness to get in position for my prey. Instead had a rankly greasy effort, whose bulk severely restricted my goat like nimbleness.

So I got to the bridging camp after first light. Met a guy from Bristol and had a quick look for the Richard's as we made our way to the Hume's. Nothing bar two very attractive Stonechat, hundreds of Med Gull, RB Mergs and Goldeneye in profusion, and a face full of Atlantic wind. 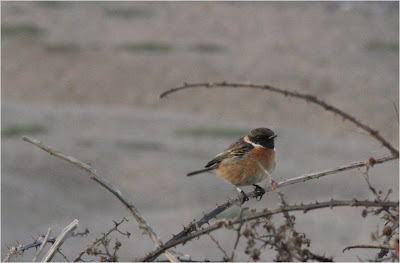 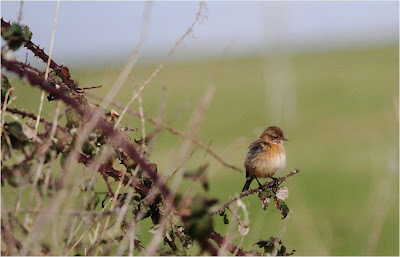 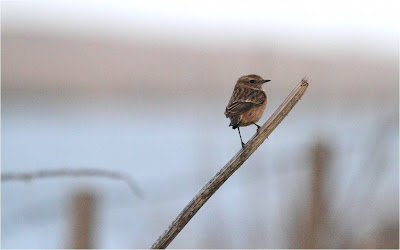 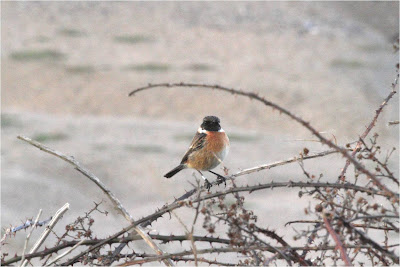 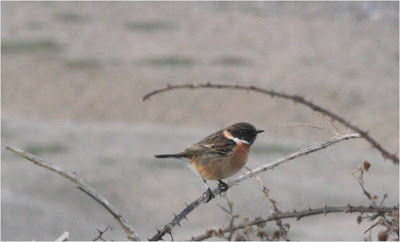 We reached the site of the Hume's, to find Mr LGR Evans on the case. Sorted I thought. He was looking grumpy. It had been seen, he'd even heard it, but had not refound it after wandering through the habbo several times. I thought to ask him to check his boots, but wise counsel suggested otherwise.

Nada! Zip. Strike one. Make that strike 2 as reports from the pipit field suggested the bird had flown into the camp at the time I had just been reaching the other side. Funny did hear a pipit calling as I met up with the guy from Bath. The Richard's was not going to be seen quickly and time is not one's side this early in the year. A female Black Redstart showed distantly amongst the pontoons, but nothing RP like. 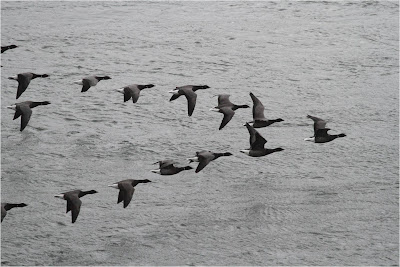 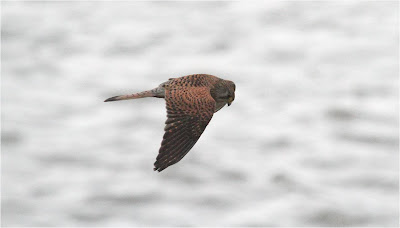 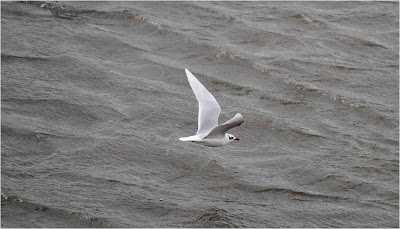 Back along the path to the fleet, the tide on the way out - I hoped to get a few waders in front of the visitors centre. Strike 3, some anglers were using the repairs at the (closed) centre to dig for bait, where my waders should be.

Ok grebes and divers in the harbour. A bus turned up going on Portland. I jumped on. Sea watching then!

After being dropped off at Southwell, I took the coastal path (wrong move) to the bill. The wind was getting much stronger up here and I was in danger of losing my woolly hat. Something that could not be countenanced. Bugger all to see as well bar a few gulls enjoying the uplift from the cliff and a possible Merlin that shot passed too far and too quick to be certain.

At the bill I found somewhere reasonably sheltered. Not far off shore a feeding frenzy was going on; hundreds of auk, gannet, shag, cormorants, kittiwake and larger gull were circling, landing, diving in a constant whirlwind of movement.

Having satisfied myself that this was the only action occurring at the bill, it was a rush back to get the bus, this time using the lee of the island for shelter and to see if there was anything grebe-diverish. There wasn't.

Happily, a bus was not long in coming and dropped of again at the Ferrybridge (B&B £25, for future reference), I could spend some serious time looking for Slavs. With all the activity in the harbour, the water equivalent of unruly dogs, the chances of a close bird were nil. I finally caught up with them way under the nothe, with a large school of BN grebe. No divers though. 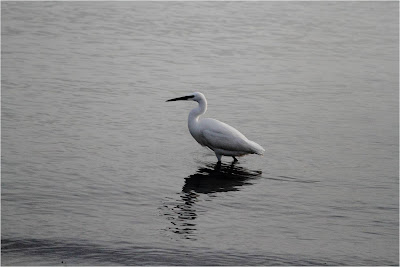 Not finished yet, I caught another bus (£4 travel permit) for Radipole just in case the Iceland or the RB Gull would put in an appearance. Of course they didn't. Strike 4 and 5. Missed the train by a minute, which gave me time for a fish supper overlooking a very calm Weymouth bay towards Osmington and the white cliffs that played a large part of childhood holidays. Aah!

The results may well have not been what was planned. But there's always next week end, if I can survive at work... 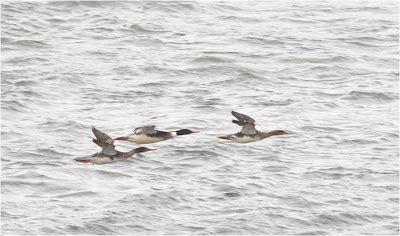 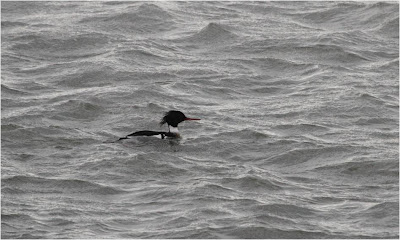 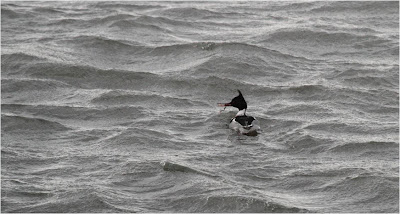 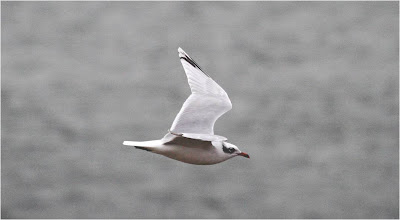