After a rather successful day out in Kent with Josh (read it here http://theuttertwite.blogspot.co.uk/2013/06/the-north-kent-circuit.html), I persuaded him to drive to a couple of likely Grasshopper Warbler sites. We had already failed majestically at the Ingrebourne (as I always do) partly because I didn't know where to look, so then we tried sites at Rainham I did know of.

While we were walking through the head high hemlock, a bird started singing quite close. Now we had visited a number of similar habitat during the course of the day and had heard many a Sedge and Reed Warbler en route, however this sort of fell in between.

When it flew up to a large hemlock stem it surprised me, as I was expecting it not to be interesting and a Sedge, but it looked like a Reed. Hang about. Looks like a Reed Warbler (from my brief view), sounds like a mix tape, at this time of year, in this type of habitat. Could only mean one thing, surely?

It could actually have meant any number of things, most of them resulting in me being useless, but being a bit impulsive I opted for my best 'considered' option. Of course as soon as I texted Howard, I immediately began to regret my impulsiveness. I played Josh the tape on the phone and without telling him what I was playing, asked him if he had heard any phrases like that of the bird we'd both just seen. He looked back at me blankly.

Ah well what's done is done. Howard would come down, find nothing and go back to thinking what a numpty! And that's how it happened... until the Friday when Dave Smith left a message to call him. That was at 6:00 in the morning.  I didn't consider this to be a good sign, and probably a pre-cursor to a lot more cursing and calling of names. I put it off until I was on the flats just in case (just in case it was bad news and I would be tempted to hide under my duvet!).

With trepidation I called him. He said he had got off early from work and had decided to give the report one last bash. He arrived on site at around 4:00am and pretty soon heard an interesting singing bird.  Bingo! Luckily armed with his recording gear he managed to get some recordings of its range of mimicry (I'll upload the recording he kindly made for me here in time, but while you wait last year's bird can be remembered here http://www.rspb.org.uk/community/placestovisit/rainhammarshes/b/rainhammarshes-blog/archive/2012/06/02/who-shall-i-be-today.aspx). My relief was more for not having cocked up than for finding a special bird.  It was only after he had hung up did it  begin to dawn on me that I had done good!

I knew that Howard would be the arbiter on whether the news was released or not, so for the moment I only texted a few associates with the provision that mum was the word. Later when I spoke to Howard he reiterated this message, saying that he had already had a call from someone he didn't know asking about a rare bird at Rainham.  His reasoning, which I fully support, is given here http://www.rspb.org.uk/community/placestovisit/rainhammarshes/b/rainhammarshes-blog/archive/2013/08/08/rare-warblers-return.aspx.  On top of that he recalled how one of the last small breeding colonies had been wiped out by egg collectors, and while it was early days with this bird (Howard soon after found a second singing bird not too far away from the first) why create problems for yourself later on down the line if all goes well.  And it appears things might have gone well, the birds attracted mates, but as to the outcome, well nobodies quite sure as yet. 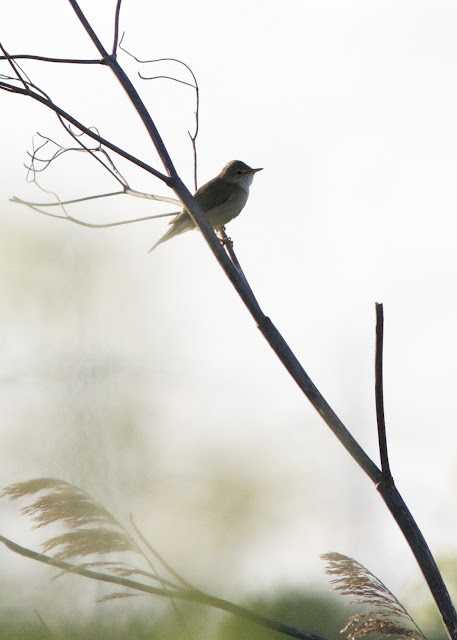 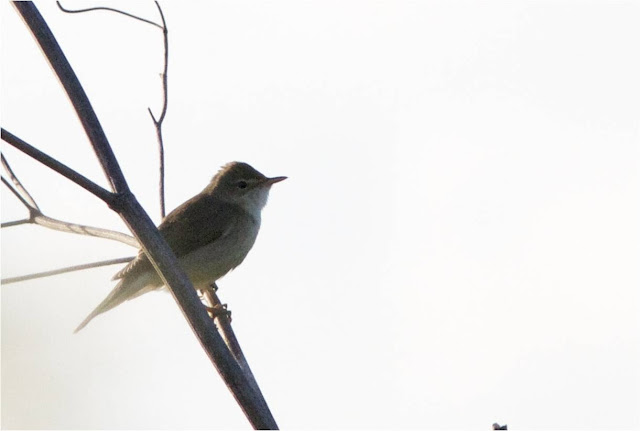