A ridiculously early start for Norfolk on Sunday and Jono, Henry L and Bradders and myself are on the way for what is promised to be a natural spectacle not to be missed. With thick fog all the way it looked like that spectacle would be mist! 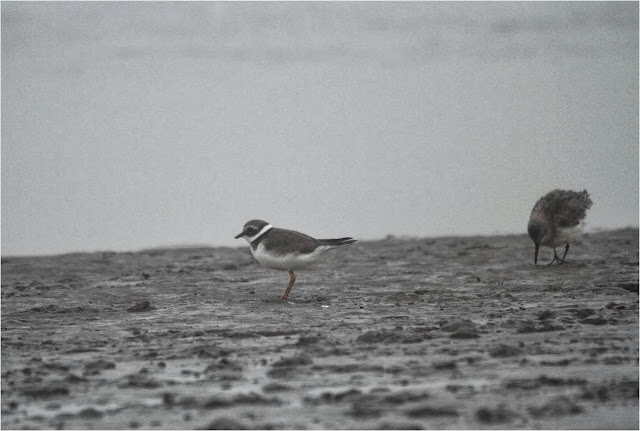 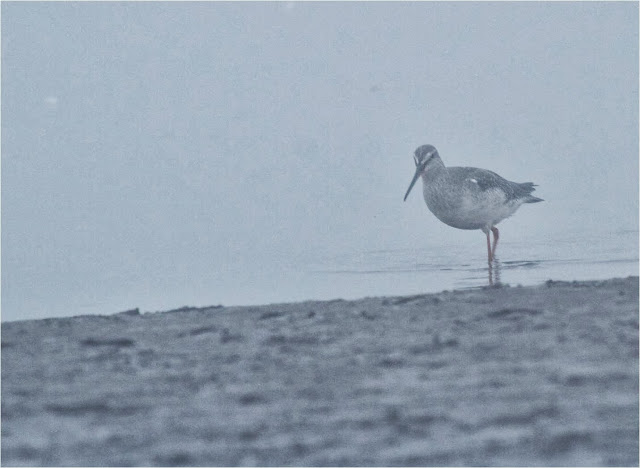 The car park at Snettisham is full by the time we get there and the beach crowded with on lookers peering into the thick blanket that has enveloped much of East Anglia.  We position ourselves on a bit of shingle and wait.  A few birds can be seen on the opposite side of our creek, and one or two potter away on our side just yards from where we sit.  Bradders calls a Curlew Sand, I call a Spotted Redshank.  This could be easy if they all plonk themselves in front of us.  The murmur of voices and the movement of the tide are drowned out now then by the sound of an approaching train.  The train is of waders leaving the flooding mud and making their way to the pits behind us. 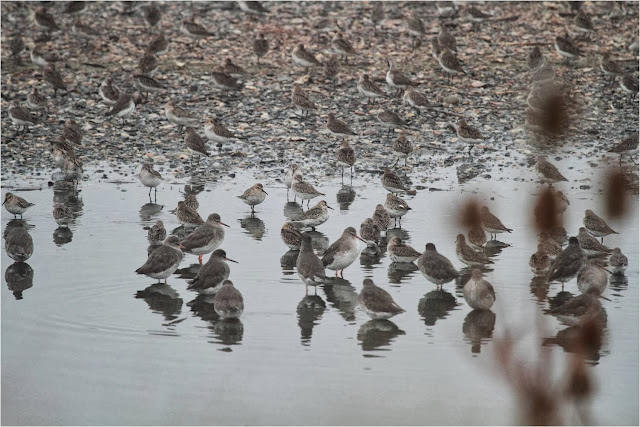 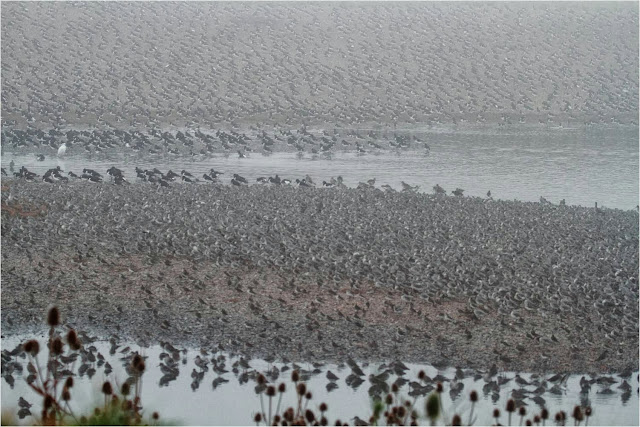 With the water now creeping up to our feet, we decide to make a move to the hides, as everyone else is doing, luckily they fill the nearest huts, and ours on the east side is relatively empty, so we get seats. Result.  The fog though is still so thick we can only just about see over to the other side. But clearly visible is the mass huddle of, mainly, Knot in front of us on a small island. On several occasions it looks like the fog is lifting only for it to roll back down.  Then finally the sun begins to burn through the fuggy blanket.  What I thought were tussocks or geographical features on the far side of the pit, I can now see are the massed ranks of Oystercatcher. 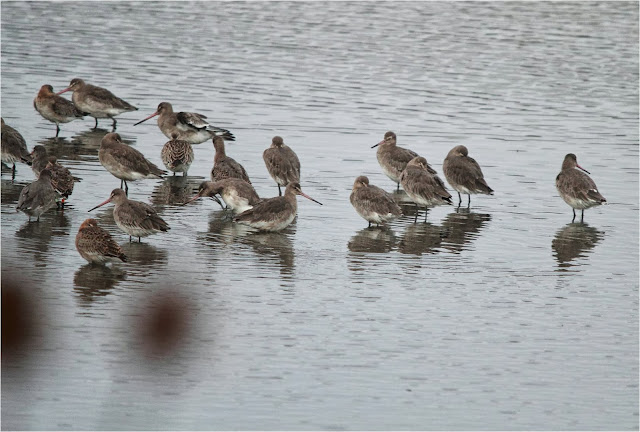 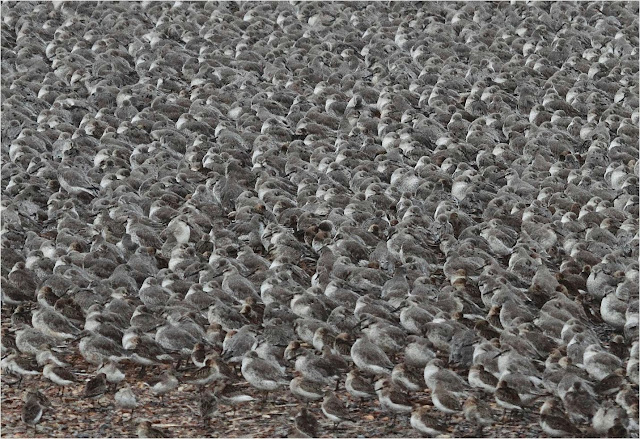 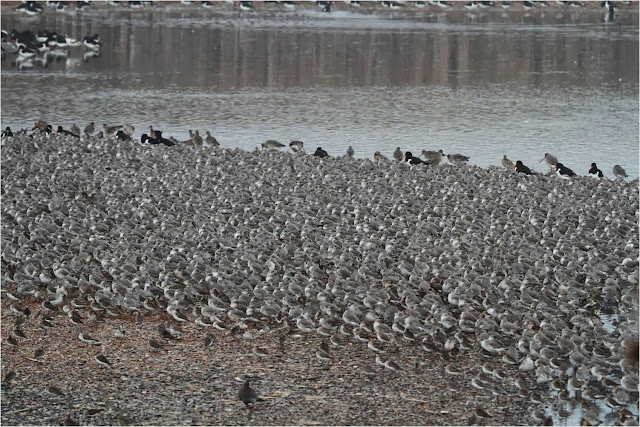 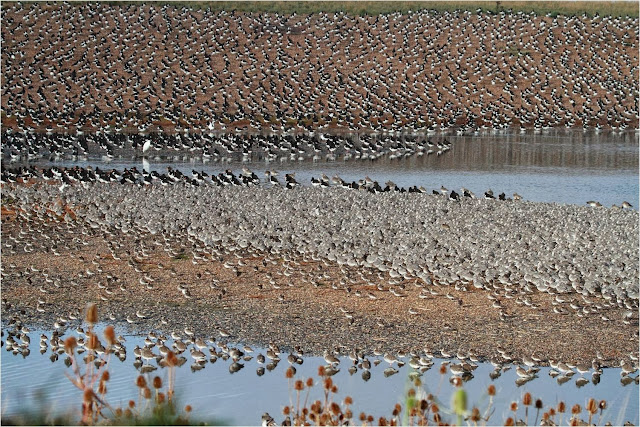 While the Knot favoured the islands, the Godwit were left to stand in the shallow water, a few Redshank pottered about, one or two Sanderling, more Curlew Sands, loads of Dunlin, a trio of Grey Plover and a handful of Spotted Redshank and Greenshank, still hungry, feed along the pit edges. But its mainly about Knot and Oystercatcher in their thousands.

The roost only holds together for about an hour before birds start drifting back to the mud as the tide recedes.  Time for us to make a move too.  Now with clear skies we get every flock as it zips over and around our heads.  Thousands of birds, great wooshes of wings, piping and the wheezy calls of Dunlin.  Noise everywhere. 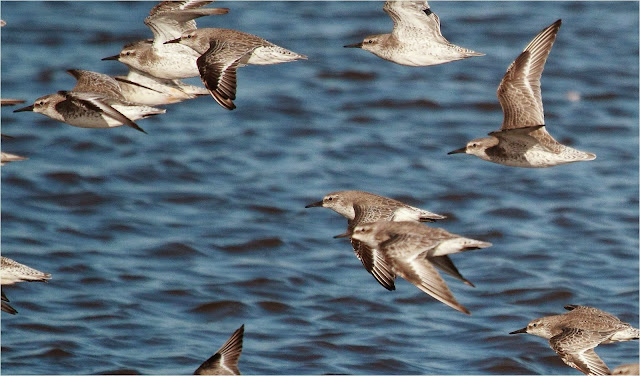 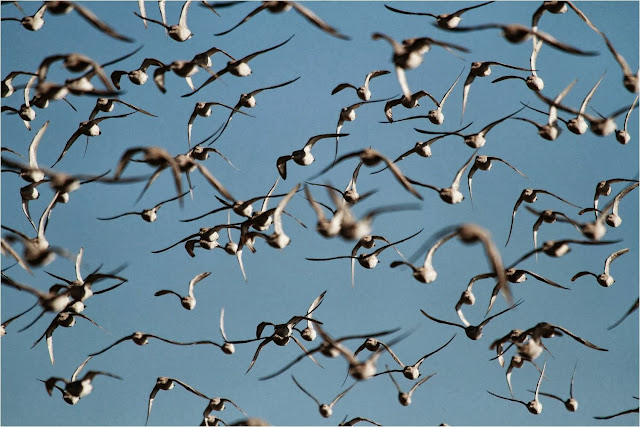 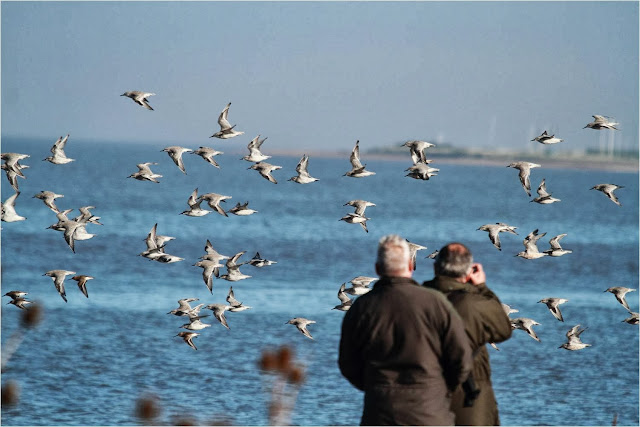 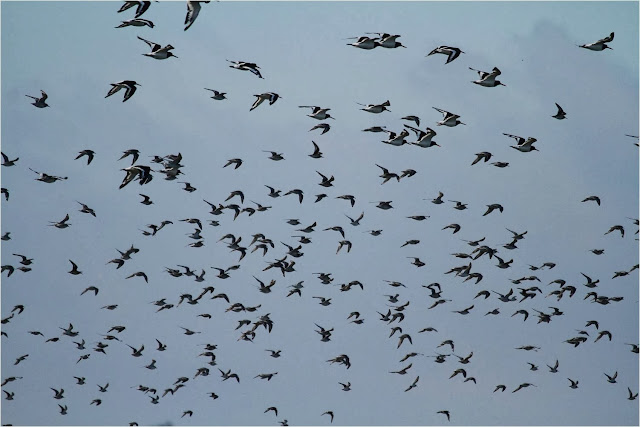 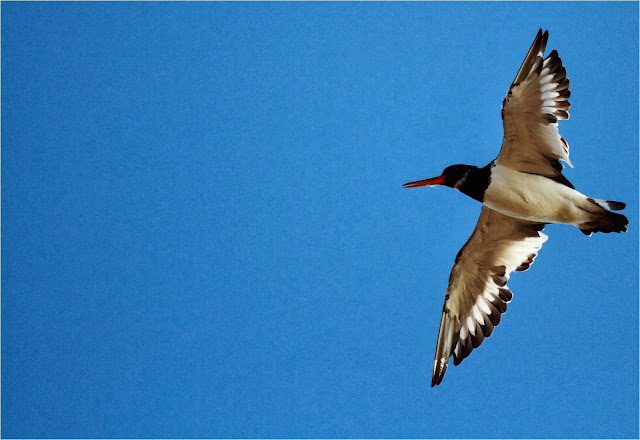 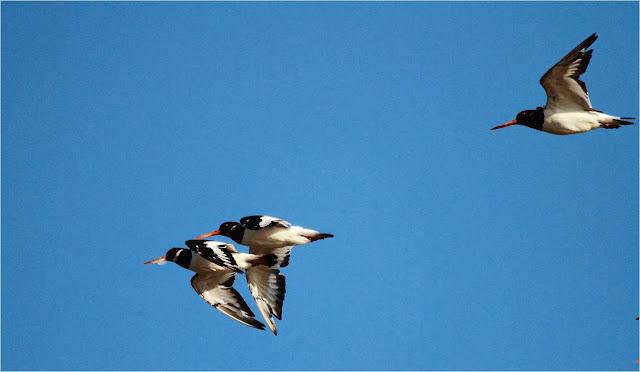 Just when you thought that pit couldn't have held that many birds another huge flocks hurtle across the widening space between the land and the sea.  While further out on the wash clouds of Knot and Bar-tailed Godwit do avian acrobatics, white flshes against the blue sky. Absolutely magical. I can thoroughly recommend it, apart from the getting up really early part. 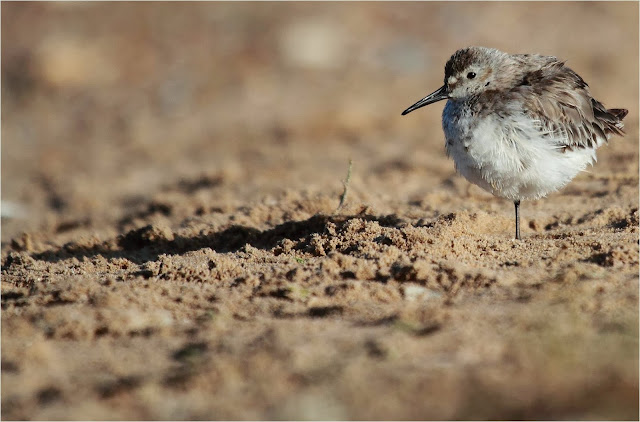 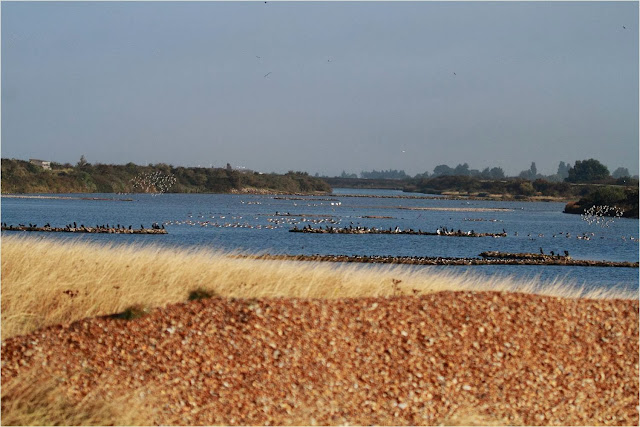 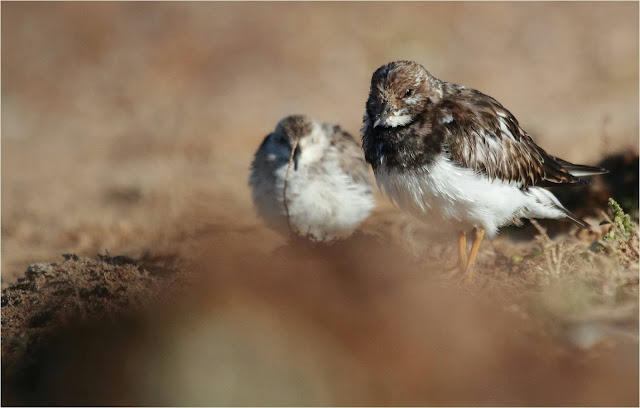 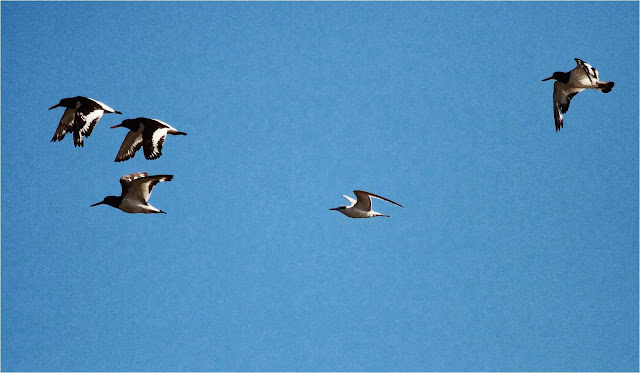 We decide to go for a quick tour of Titchwell where, for  the filthy listers, is the promise of Little Stint, Red-necked Grebe and the for the Norfolk listers (ooh me again!) Pec Sand.  Titchwell was crowded as it usually is on a sunny Sunday: with Dunlin being called as Curlew Sandpiper, Greenshank as Spotted Reds by the eager.  We had a look at the sea.  It was blue. Job done.  Not a lot on show, especially of the RNGrebe variety. A couple of scruffy eider and a bonxie way down the beach to the west giving a tern a hard time. So of course we left just before two Roseate Tern came and sat on the rocks.  Did get the Little Stint on the way back, looking glorious in the sun light, but with the evenings now rolling in quicker than the in coming tide we left for the final stop before driving home. 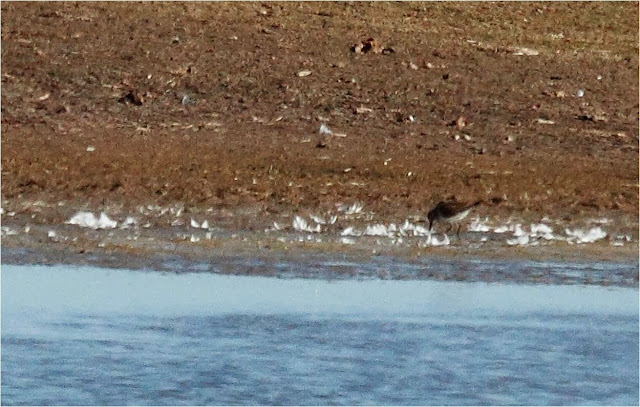 Lynford and the Two-bar Crossbill(s).  Henry needed it, I needed it.  Henry still needs it and I do too.

These twisty beak freaks are rapidly becoming my dipping nemesis and will soon overtake Penduline Tit as top time-waster.  I don't even bother trying to see them anymore.

An absolute cracker of a weekend.  Big thanks to the drivers who overcame sleep deficiency to get us home in one piece. 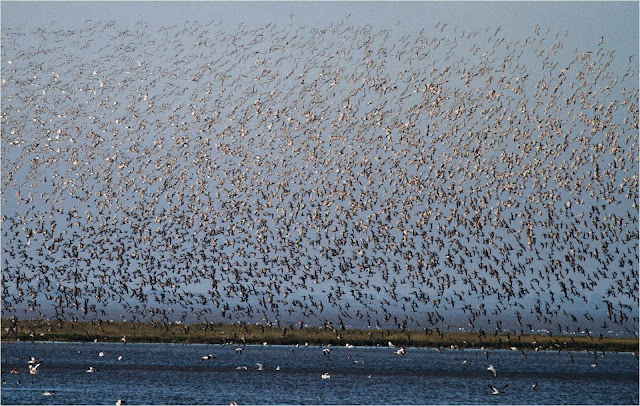 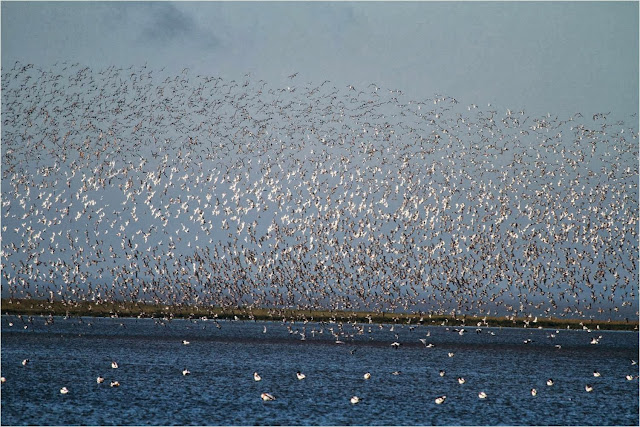