Just popping out for some milk... 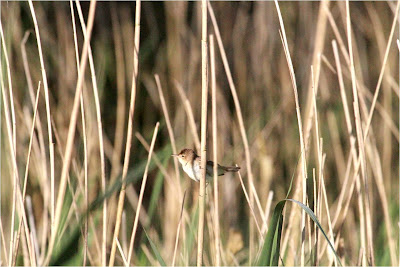 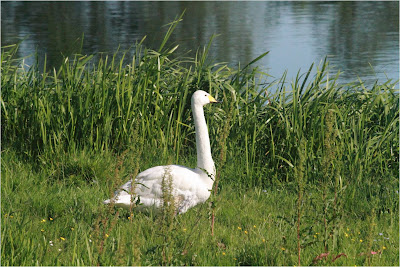 Saturday and I am contemplating trying out the new guided bus system in Cambridge, specifically to take me to Fen Drayton Lakes for a little potter around.  Just biding time you understand till night fall so I could hang around the fen at the Nene Washes and listen out for Corn Crake.  But the Woodchat Shrike looks enticing at Winterton, and for only £15 odd a return, value for money. The gardening could wait.

On the train my plan hits a bit of turbulence.  Blyth's Reed Warbler, Warham Greens.  Decision time.  Luckily I am still going the right direction for both, so the toss up occurs at Norwich.  First train out Sheringham.  No contest really and I could feasibly do both.  This is however heavily reliant on trains, buses, directions, walking, birds and a few other variables.

Handily my BG app says there is a bus coming soon, and this being the Coastal Hopper, it will stop where ever you want. This is looking good, the only large fly just about to fall in the ointment, the fact the bird has not been reported since midday.  Nothing ventured blah, blah.

Up the road to the greens, people on the way out say its still there, singing on and off. I estimate I have an hour before I have to leg for the bus, the last bus, and try for the shrike...

A few people are standing looking at a nettle and dock filled pit, no reeds so I am happy.  No warblers, but a lot of Goldfinch tinkling away somewhere in the elders. 20 minutes pass and still nothing.  Another 10.  Perhaps I could blag a lift, or worse case scenario walk to Wells for a taxi. 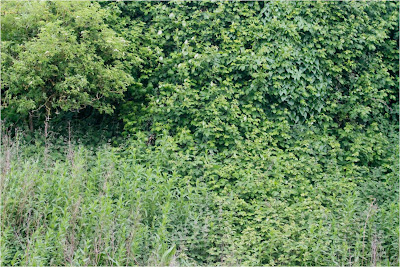 Five minutes later the bird starts singing, and what a really quite beautiful song it is.   Very un-Reed Warbler but with some common elements thrown into the mix.  It, however stubbornly refuses to show itself, even when it is singing in the elder right next to me. 20 minutes later with no show, I have to make a decision, wait for a brief glimpse of something which looks very much like a Reed Warbler with spectacles or hoof it for the bus. I choose the shrike...

A futile gesture anyway as by the time I get back to Norwich, the next train to Yarmouth is in an hour and by the time I would get to Winterton it would be dark. Better get the milk then!

Meanwhile Bradders has texted me of the warbler and how, if free, he is going to go for it tomorrow - fancy the ride. BRW aside, I know the young year-listing Bradders is up for chasing anything that's about, so I agree, providing he doesn't mind picking me up in Shelford. The gardening will have to wait.

05: 30 and the brad-mobile picks me up outside the local pub.  The Blythe's done a runner during the night, but he fancies a bit of shrike action and the day's set fair.

First stop Lakenheath, just in case the orioles are showing, but more for Turtle Dove and the fact that it's a bloody great reserve. 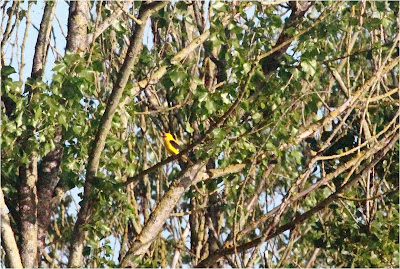 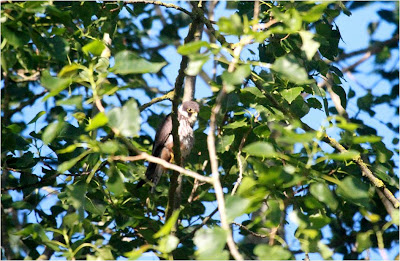 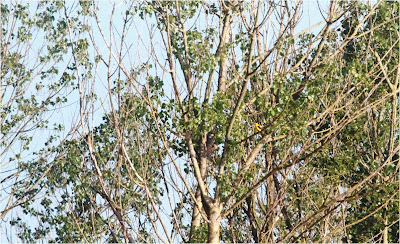 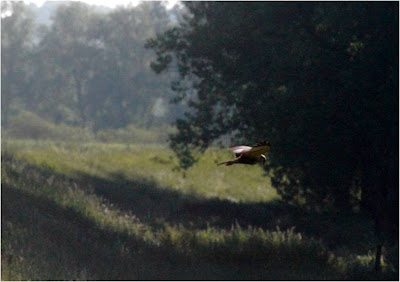 Somewhere between the plantations we stop to admire a hobby perched in a tree and to listen to the Cuckoos. A Marsh Harrier skirts the western plantation. "Oriole" cries Mr B. Bloody hell.  How many times have I been here and just heard the calls and now there are 3 birds floating around the tops of the trees and we have them to ourselves. Needless to say as soon as anyone else turns up, they bugger off deeper into the poplars, their calls receding with them.

A good start. A good start followed up by one then two fly over Bittern, around six cuckoo, an injured Whooper, a tail-less but showy Garden Warbler and a few more Hobby.  Lakenheath gives up the goods, again. 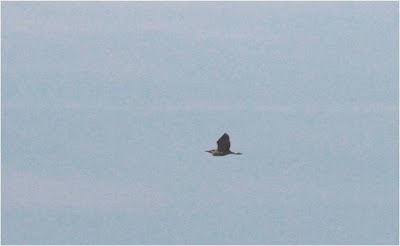 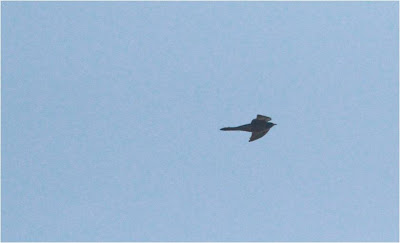 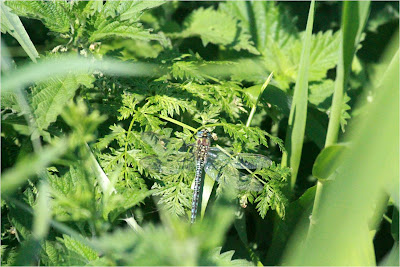 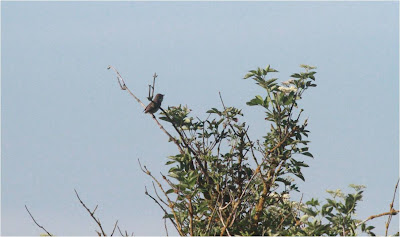 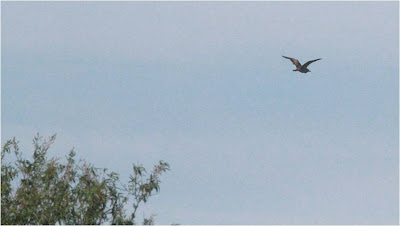 A quick breakfast stop at the road side cafe of choice in these parts.  Er, forgotten the name already. And off to Winterton, site of my first and only Woodchat a couple of years back. 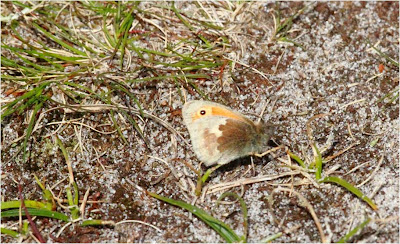 OK it's a scruffy first summer female, but a shrike nonetheless.  "Always see shrikes...",  wise man once told me. And we had plans for another down at Landguard (Red-backed), until that got booted off the premises by photographers (no hint of irony here!). 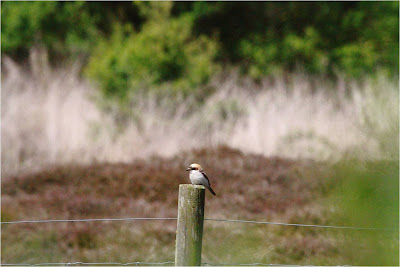 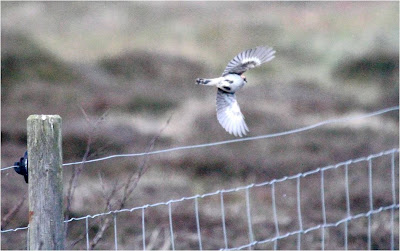 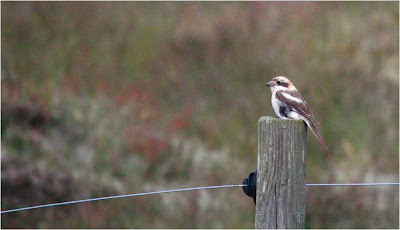 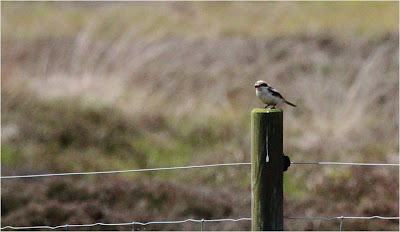 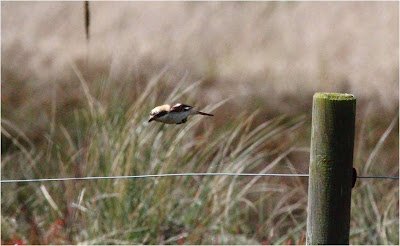 So after gorging ourselves, we headed off to Minsmere, just in case.  In case the gen on Long-eared Owls could be followed up, primarily, but they'd fledged and flown by all accounts.  So we made do with one third of a Stone Curlew, another flying Bittern, 3 Glossy(awn) Ibis, and small group of Kittiwakes having a preen
on the scrape. 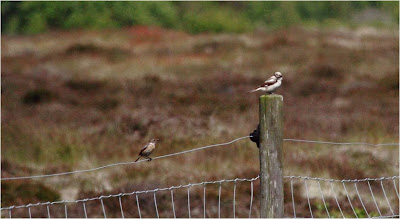 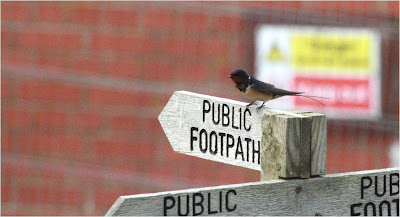 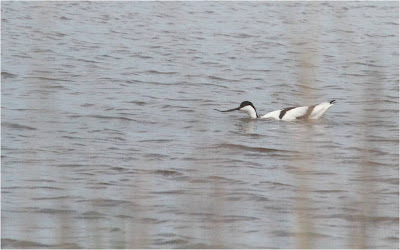 Got to be said Minsmere looked great, but I think I prefer it early spring or late autumn. But now news of another Woodchat Shrike just down the road at Walberswick means we will get our two shrike day. 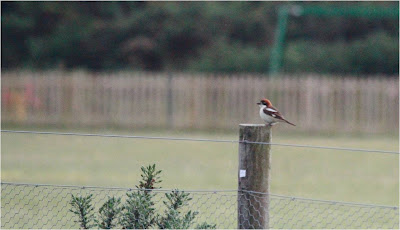 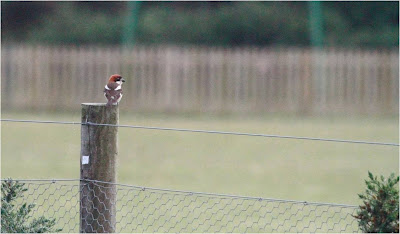 After some good views of the not quite adult male plus a pop up Dartford Warbler, we've just time to go for the long-staying, lost Wood Warbler at Sutton Common.  Small bird, large wood = complicated instructions for finding it. To give the bird a bit more of a chance not to be found we retired to local hostelry for a quick beer. But find it we did and with some spanking close views as it came to investigate our pitiful attempts at calling to it.  One less hill I have to climb in Scotland then. 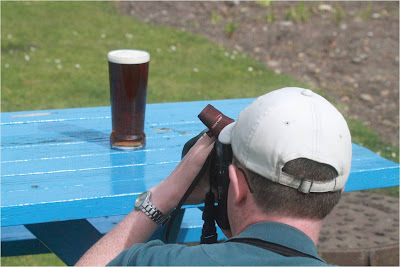 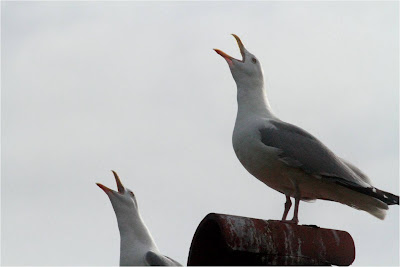 Just in time, as the clouds gathered and rain began to fall.  A big thank you to David for a great day and informative company.  I crept in the house around 9:30.

"Why didn't you pay the ransom?" 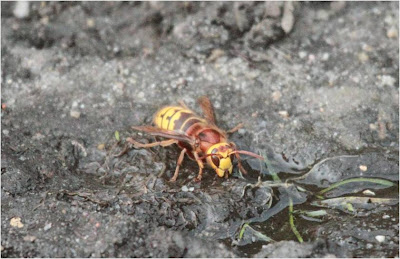 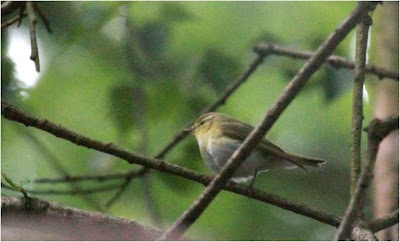 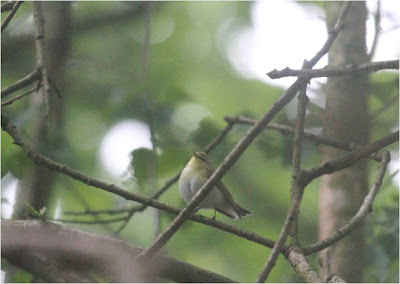 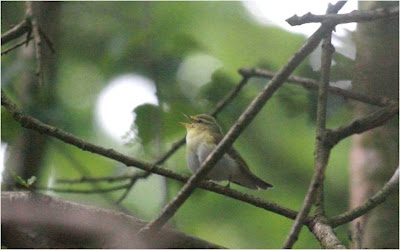 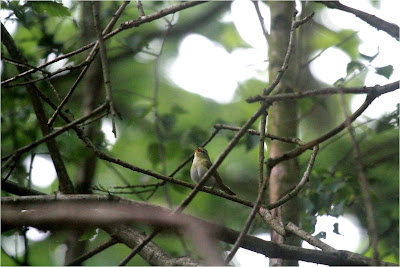