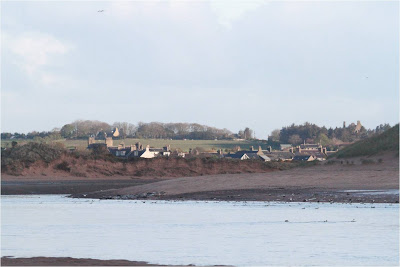 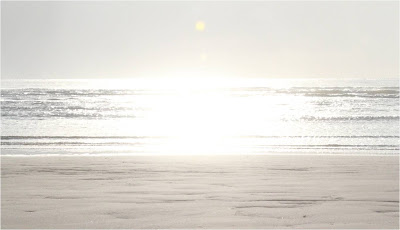 Saturday morning and the sun shone, the cold wind had abated slightly and I was refreshed. I had a few hours before loading myself up with breakfast, so down to the estuary I scurried hoping to get some shots of the King Eider. The other eider were there, the terns, the seals, but no sign of the blue-headed one.  Scanning the masses of duck I finally caught sight of him, still too far off. I'll get him on the way back. 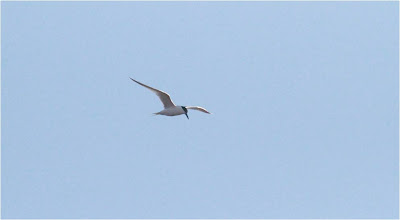 I traipsed to the beach for a bit of sea watching. More terns, some scoter and a lot more eider and a couple of summer-plumaged Red-throated Diver. It wasn't looking like it was going to get much better so I headed back up the estuary. Another birder was crouched on the mud so I gave him a wide berth so as not to flush anything of interest..

As I drew level he began to pack his things so we had a chat.  As a local birder he was more than interested in the Ross's Goose and asked for a picture, he may regret that. We parted, him to find a mega rarity no doubt and me for breakfast.

As a postscript to the last blog, checking on the weekly review on Birdguides I  read that the GLs had up-rooted itself from Strathbeg and had taken up a new residency at Ythan... now if it only could have done that a couple of days earlier.

Refreshed and replete I caught the bus back to Aberdeen and from there a train to Elgin. But I didn't get off at Elgin I carried on to Forres as I liked the idea of the Bay of Findhorn and the forest that lay to the east of Kinloss which stretched all the way to Burghead my destination. In all about 6-8 miles, which I reckoned would take 3-4 hours, even with some stops on the way.  It took about 7, the weather turned from sunny spells, to every variety of precipitation imaginable, and colder.  The part through Kinloss dragged  appreciably and I was glad when I could turn off the road and enter the pines, unfortunately what had appeared as tracks on the map, where now overgrown and deeply rutted slowing my progress further.

I reached the sea and normal paths, which helped.  In the forest Siskin called everywhere, some were singing, some with a weird buzzing end piece, a flock of crossbill, much larger and possibly Scotties flew over the pines, Coal Tit everywhere.  The plantation itself was a bit disappointing, none of the Caledonian understorey as at Rothiemurchus, only in areas of clear fell was there any variety in the tree species.  Here birch, rowan and a few sycamore held many more birds; Treecreeper, warblers and crests. I had optimistically hoped for Crested Tit. 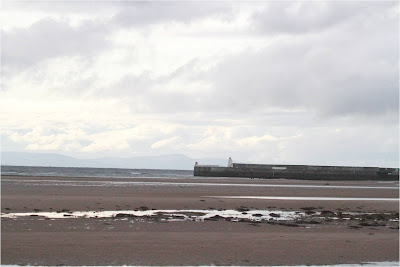 It was getting late when I arrived at Burghead, a day gone and not much achieved.  I had a quick scan of the sea from the pier before finding lodgings, the entirely satisfactory Station Hotel. 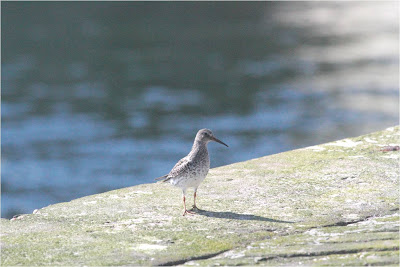 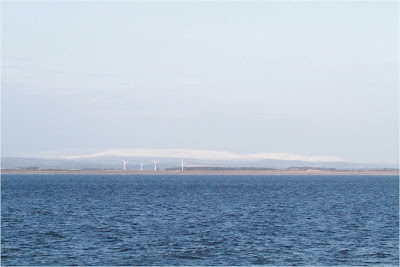 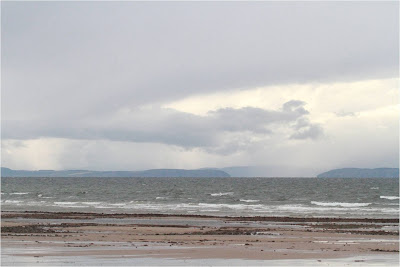 Out at sea a few Great Skua were harrying gulls, Gannet and anything that they felt they could bully.  Some far-off diver sped past while a probable Greenshank zipped westwards, always the constant stream of calling Siskin and Swallow heading out over the sea north.  A flock of velvet scoter zoomed past east and then just as time was up a large winter-plumaged diver came in closer and plonked itself far enough away to be really annoying as it bobbed up and down behind the swell. Large and white-beaked is about all I could get.  There had been first winter White-billed around this winter, but most likely, I presumed to no-one in particular, a Great Northern. 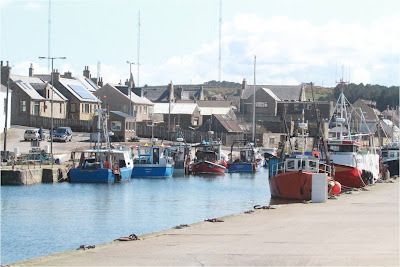 I was back on station within the hour several pounds heavier.  I gave it another hour or so, by which time my Skua tally was up to 5, no other diver action and the one I had seen earlier had disappeared.  Hopeman it is then.  I staggered up over the point with my pack and had to have a rest at the first bench I found.  This could be a long day.

My pager bleaped, the WBD was showing just off the maltings - surely those large buildings just to my east. I found some speed and marched off, target number 3 tantalising within reach. Along the road I met the birders who had found the bird.  Close in they said.  Just beyond the car park and the maltings. I thanked them and rushed off.  By the maltings I set myself up again.  I could just make out the bird to the east, apparently still quite close in to some rocks further along.  Off I go again. Having reached where I thought it was I couldn't find it, but luckily a few others turned up to help search.  Bingo a diver with a big conk, not quite as close I would have liked, so more crappy far off shots then.  Enjoy! 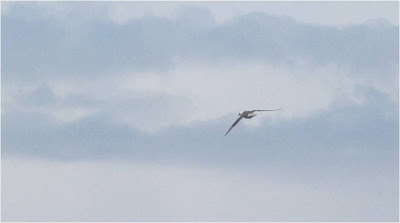 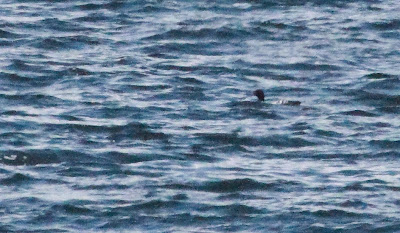 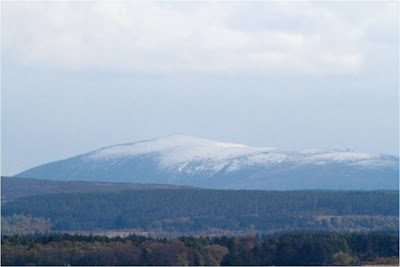 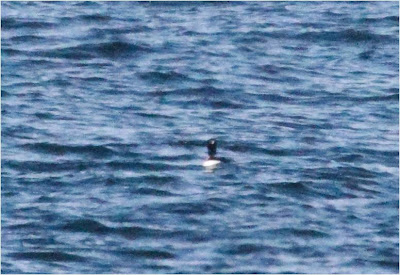 Job done I needed to get back to a train station and that meant Elgin some miles to the south.  From there I had no idea what to do, but judging by my recent efforts it would probably take most, if not all, of the day to get there and it was getting hot. The route I planned was pretty direct, but took in as much woodland - just in case for Wood Warbler, Tree Pipit etc. steering clear of the main roads. 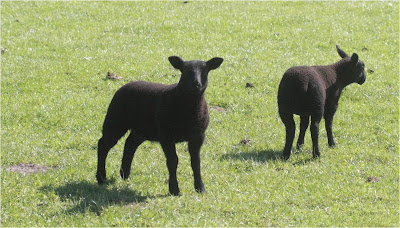 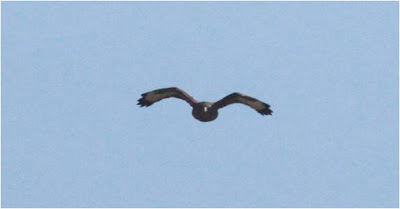 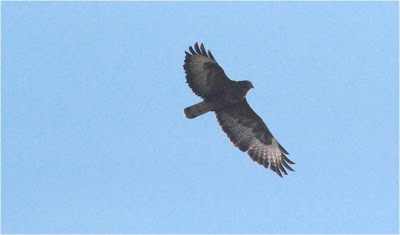 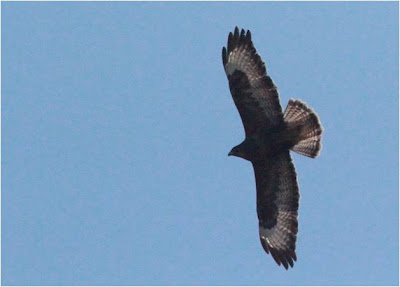 The countryside was quite beautiful and along the way I picked up a Cuckoo calling from the first patch of woods, Jay, Long-tailed Tit and more Goldcrest. 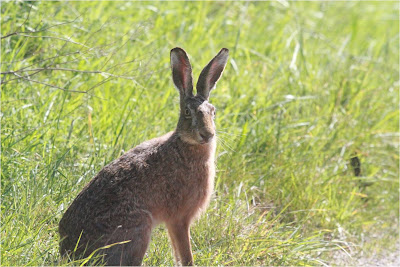 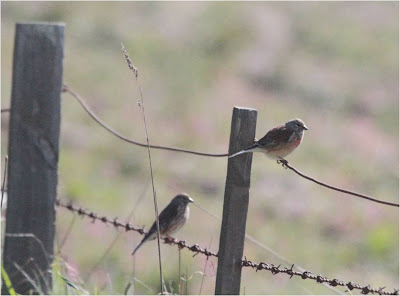 Just south of Elgin I entered Quarry Wood and soon picked up the song of Tree Pipit and then a second bird further along. The people of Elgin are surely lucky to have an amenity like this on their door-step.  I made my way along the river into the town, picking up a Dipper, Common Sandpiper and oddly a Mandarin Duck on the way.  By now I was knackered and picked the first hotel to crash at.  Not before a overly large meal and a bottle of wine you understand.  I could have a lie in tomorrow as I had no plans whatsoever. 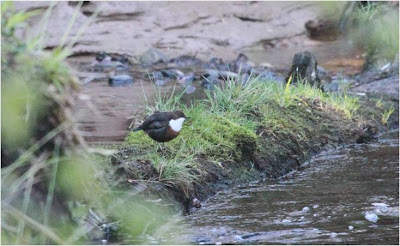 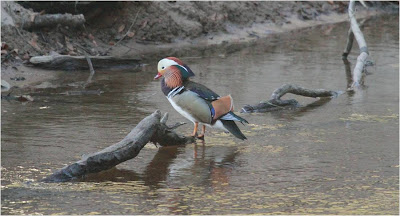