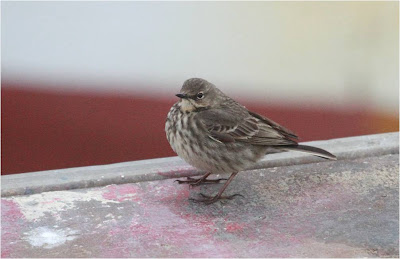 Having said for weeks that I would, but always shying away well before the last minute, I finally bit the bullet of a 9 hour train journey and a couple more hours bussing it and made it to the Loch of Strathbeg.  Bet you can't guess what was there?

I had hoped that a bottle of wine would make the time go quicker and perhaps aid sleep, but the guy snoring across the aisle put pay to that idea, and I had baulked at paying an extra sum for the cell like seclusion of a berth so my fault really. Aberdeen at 7:30 and it was cold and wet, I thought, this could turn out to be shit.

An early bus to Fraserburgh did nothing to allay my fears. Fraserburgh is not so much a shit-hole, it's much further up the colon for that, as a place to evacuate quickly.  I had time and an appetite to kill and needed breakfast.  Here is probably the last Wimpey on earth, and dining there I can understand why, it was awful.  I had the place to myself. I ate and left with haste. A quick look down by the docks to see if there were any lingering white wingers, there weren't, instead a few Atlantic Seal rolled around in the black water ready to fight over any fishy scraps. 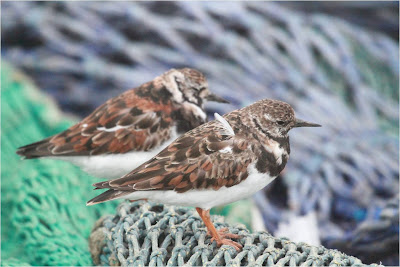 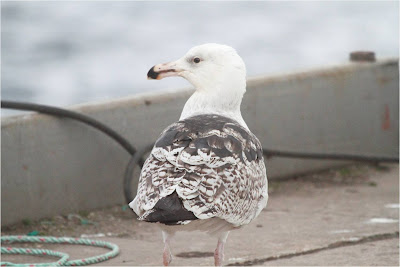 Everything here seemed to possess an attitude. The showy Rock Pipit on the jetty showing no fear of me as I took its picture, the Turnstone waiting for a corpse. While I waited for the bus I watched, and was watched by an old guy from a house across the street.  Every so often he would open his window and hurl a chunk of bread out for a obstinate Herring Gull who would stand his ground in the street, even in the face of traffic which had to go round him, while he ate his meal. 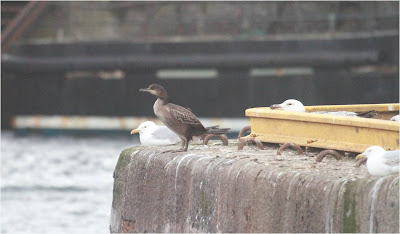 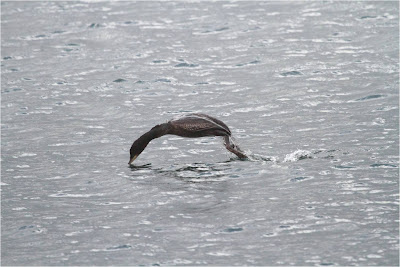 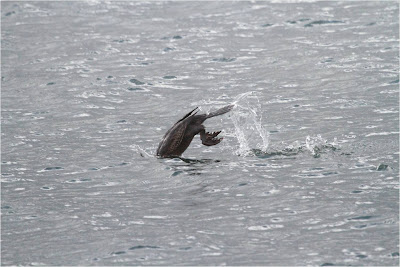 On the bus and out of town the transformation of the scenery was quite startling; all farmy, woody and cosy-looking cottages. Having been dropped off, I walked towards Strathbeg.  19 minutes it said on the website.  I concluded this would be 19 mintes for the slow and infirm, with a heavy pack it soon dawned on me that it meant me too. As I approached my pager informed me that my  first quarrie was showing well from the Tower Hide (possibly an ironic name, it towered all of 6 inches off the ground!).  A sign pointed me in the right direction, neglecting to say how far said tower was. A group of RSPB types coming towards me from the other direction.  The bird was still showing well. All I need to know, right? Wrong. The next guy informs me that it was showing well but had now disappeared. No worries, the last location "the tower pool" couldn't be all that big, surely? Wrong again.  When I entered the hide the inormity of the task hit me. This was just one end of the Loch and it was to say the least extensive.  I wasn't even sure which patch of water was the pool. It could be a long day.

It was cold in the hide and the wind whistled through the windows enough to suggest it was even colder.  Every so often I would have to go outside just to warm up.  After a few hours I had every bit of available clothing on me, and I was still cold and I hadn't even opened the windows.

Still there would be stuff to look at in the mean time.  I scanned the expanse of reed fringed pools, scrapes and wet pasture.  Not a lot to be looking at in the mean time, familiar ducks I could have seen far more easily and comfortably at the little tea shop of happiness in Wanstead Park: Gadwall, Tufties, not much in the way of wader action - Oystercatcher of course (they are everywhere), a few Ringed Plover purposefully inspecting the wet grazing areas where a few Konnick's lounged in between snacking, some curlew and a lot of gulls.  A large flock of Barnacle Goose would occasionally rise up from the arable land, pretend to come closer then fall back into the fields. In amongst them I spotted an all white individual, which through my bins looked round-headed enough and small enough to be a Ross's Goose (tickable bird for some listers, in waiting for others).  I vaguely remembered one had been keeping company with the dark geese over the winter around here, presumably the same bird. 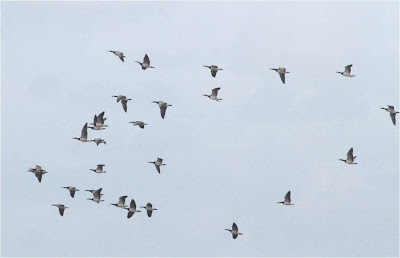 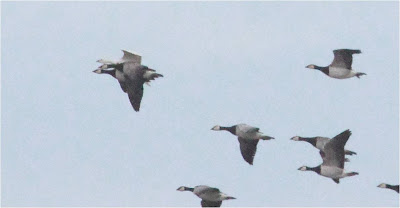 In amongst the gulls I managed to find a couple of Little Gull and to the east a small party of tern were braving the wind on a pool in front of the visitor's centre, amongst them I picked out a couple of Arctics through the scope.  Still no yank wader. It had been the plan to tick and run, well at least tick and then have a look at what else the reserve had to offer, but time rolled on. Sometime during the afternoon an elderly couple turned up, moaning about their lack of success that morning.  They'd dipped the diver and about everything else they had gone for.  Their luck was not about to change.

A Peregrine charged past the windows, as a Kestrel had done earlier.  The keen wind was not helping at all, everything, if it was here, was hunkering down out of sight. The couple left still grumbling and headed off to (probably) dip the Eider to the south.  I sat it out. 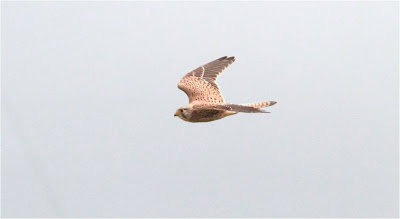 After about 5 hours I was ready for a change of scene and some hot drink, so I made my way to the centre, which was deserted. At least it was warm and the tea machine offered a decent cup of coffee so I stayed awhile and warmed up.  The windows gave me an alternative angle on what I'd been looking at for the last hours, but still no target.

I'd give it one more go and then head of to the village for the bus and go and get some King Eider consolation. Of course the yank wader was now showing itself albeit as far as it could possibly be from the hide.  Showing well, my arse!  It's yellow legs shone in the early evening sun, but conscious of the fact there were a couple of Greenshank knocking around I willed it to fly a bit.  Now I've seen quite a few Greenshank in my time, but they can fool even the best, and I am in now way that good. I later checked against pictures posted for the bird on Birdguides, it appeared to fit. 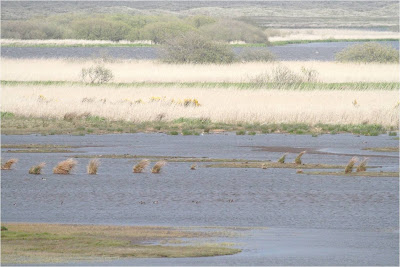 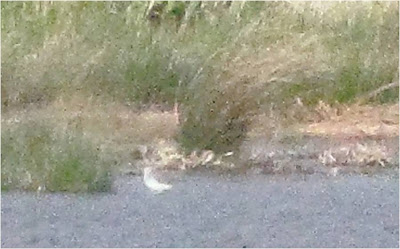 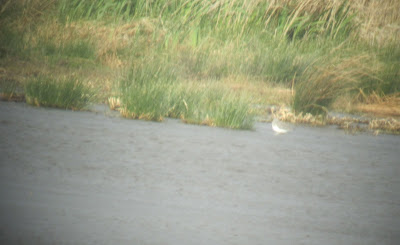 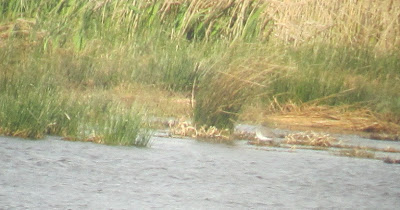 "Have it!", as Mr Garner would have said, though he would have brought a greater experience and thoroughness to the ID. I am having it.  Just in time too.  After 10 minutes where it didn't do much I packed up and started for the village.  Half way down the track I remembered I had my converter with me, and although it would mean manual focussing it could give better results than my piss poor attempts with camera and digiscoping. I thought about returning, I started back, thought about it again, and turned towards the village.

It snowed in Peterhead while I waited for the change in buses, but when I got to Newburgh it was a very pleasant evening, the sun shone and thankfully I was out of the worst of the wind.  A quick ramble across the golf course to the estuary, I had an hour before the last bus to Aberdeen.  The river was full of Eider, hundreds of them. Some mergs, a couple of scoter and hundreds of tern, and loads of Yellowhammer singing from the gorse (news of their demise clearly had not got through to them up here). I made my way to the mouth of the Ythan, still no King. This was clearly not going to be a quick job either. On the other side of the river huge herds of seal had hauled themselves out for a sunbathe, but clearly they were not happy with my tripod, some humped into the water. 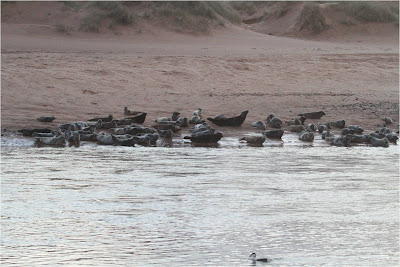 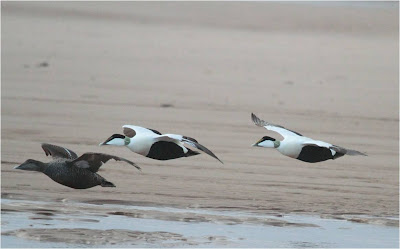 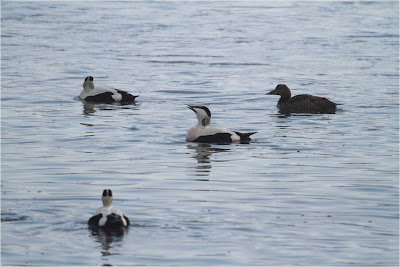 Scanning the masses of Eider I eventually found the drake King Eider, and a fine beast it was too.  Too far for another crappy shot, but as I had already missed the last bus I had now resigned myself to staying the night in the village. 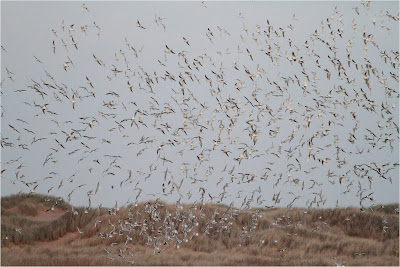 All things considered it could have been worse, Newburgh is a rather quaint little village and the dunes and sea held promise for the morning.  Happily the Ythan Hotel was situated nearby, and happily it had a room, and even better a really comfortable bed.  Life is sweet. 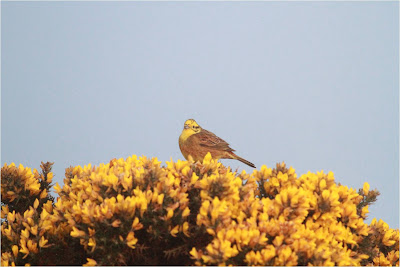